It started off on a climb that was already more challenging than Yankee Boy Basin. At the crossroads, we took the road to the right to Governor Basin. The road turned into a shelf road with some great views of Yankee Boy Basin on the way to the top. At the top we found the Virginius Mine. This mine is now being worked and is gated off to the public.

Working our way down into the basin we kept going, hoping to make it to the Governor and Humboldt Mines across the basin. However, we had to make a small loop when it appeared that the trail ended. On the way back, we turned toward the Mountaintop Mine but ran into a locked gate almost immediately after the turn.

We headed back and took the road to Sydney Basin. We were not disappointed. The trail was steep, rocky, and muddy in places that required some negotiating. That's where it got really fun because we had some obstacles to go over and down. We finally got to Sidney Basin, and from there we continued down a narrow and tippy shelf road to the intersection with the Governor Basin trail.

This trail was a blast! Next time we will run it by going up the narrow shelf road to Sydney Basin and then on to Governor Basin. It was a great finish to a great day, and we were looking forward to more fun over the next two days. 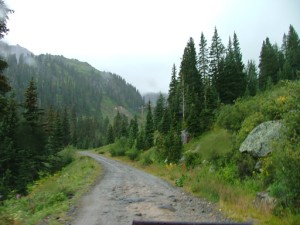 Led by Monica I.
A few of us still wanted to do another trail after doing Black Bear Pass, Imogene Pass and Yankee Boy Basin so we continued on and did this trail. It was a fantastic surprise and probably the highlight of the trip. It starts off on a climb that is already…
Join Us!
If you aren’t a Member or Subscriber, you can’t see all of the content on this site. Get membership information to see why this site is best when you join and log in