A few of us still wanted to do another trail after doing Black Bear Pass, Imogene Pass and Yankee Boy Basin so we continued on and did this trail. It was a fantastic surprise and probably the highlight of the trip.

It starts off on a climb that is already more challenging than Yankee Boy Basin. We came to a crossroads and arbitrarily decided to take the low road to the right. That brought us out to Governor Basin. When we got to the bottom of the basin we looked around and just picked a spur that went up to a big mine that turned out to be Mountain Top Mine.

The Saint Sophia Ridge was a little scary-looking with the rain and clouds circling the peaks so we joked about it being the "Fortress of Evil" (it really looks like a fortress out of a bad movie). It was all around us and it was really cool.

We got up to the Mountain Top Mine and checked things out. The abandoned tram looked like it was really big at one time, though it was completely broken apart. The machinery was very interesting. The shack there had two electrical outlets inside that looked new, which was weird.

When we came down we decided to go up another spur and jokingly called it the "Driveway of Doom" because it looked like it was going up into the "Fortress of Evil." We crept up to it because we couldn't tell if it was going to work out or not. We finally got the binoculars out and discovered that there was no way we were going to make it around the ridge because the trail was covered over in a few places. It would be a cool hike, though.

We came back around to the first fork and took the other one up and over the ridge instead. That's where it got really fun because we had some obstacles to go over and down. We finally got to the bottom and we were in Sidney Basin where we stopped at a round, flat area of trail.

There was a big rock in the sandy trail and we hadn't posed all weekend so we all got up on it for some flex shots. It was one of those "perfect" rocks for flexing so w
e snapped some pictures in the fading light.

We kept going on the trail but it looked more and more like it was going to dead-end. It wasn't on Ladd's GPS and it's not on a topo map. We got to the top of a hill and the road didn't look promising, but we had come a long way so Mike went to check it out. He went around the corner and came out on the trail just above the first fork, so we had made a big circle.

The last part there was very tippy and intimidating on a shelf road with flowers growing in the middle, but we all made it.

This trail was a blast! 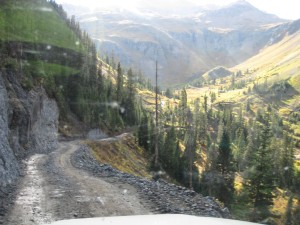 Led by Roger R.
Our objective at the start of the day was to do Black Bear Pass, Imogene Pass, Yankee Boy Basin, and Governor Basin. We had made good time on the Imogene Pass descent and Yankee Boy Basin was a relatively short run, so we continued on and headed up Governor Basin….
Join Us!
If you aren’t a Member or Subscriber, you can’t see all of the content on this site. Get membership information to see why this site is best when you join and log in