We had just finished all of Poison Spider Mesa except for the overlook, and we were really making good time. We headed out toward the Launch Pad with plenty of time before lunch. The weather was also looking like it was going to be fantastic.

The Launch Pad is always so intimidating, but then when you finish it you realize that it isn't as bad as it looks. No one had any issues at all, and we were soon on our way.

No one had really decided if they were going to attempt the Witch's Crotch until we were actually there. It doesn't look like much, but we had all seen the movie of someone flipping over in it. It's pretty easy to get a wheelstand and get way too light.

Don decided to try it, and he carefully lined his Jeep up over the crack. He took it slowly and drove right through it, barely getting his front tire off of the slickrock.

Michael went through it next, and his first few lines weren't working out. He got a good wheelstand, but he managed to back out of it. He finally found the line that worked for him and drove right through it.

Mike S. was the only other one to try Witch's Crotch, and he drove right through it like it was nothing, barely getting light on the front. Nice!

We've had lunch at the top of Skyline Drive before. It's a great place for lunch because it's such a high point and you can see all the way around you for miles. However, this time we hit the top of the obstacle a little before noon and it was pretty windy and chilly. We decided to keep going and have lunch at the Washtub instead, where it was more sheltered. Skyline Drive was a blast on the way up and on the way down, like always.

The Washtub had a lot of water in the bottom hole, but it turned out to be okay anyway. Some people had lunch while others messed around with the ledge at the top of the obstacle, and then we switched. That made lunch go by very quickly.

Don tried the line on the left up the biggest part of the ledge in the Washtub, but it was too slick and too steep. He tried the middle, straddling the crack, but that didn't work (though it was really close). He ended up a bit to the right of the crack and walked right up it.

Michael went next, aiming straight for the crack. He barely slowed down all the way through the obstacle, giving it some extra gas at the end to pop up and over the ledge. He made it look really easy, and he'd be the only one who didn't have to go on the right side.

Bob went next, making the whole thing look pretty simple. He drove right through it.

Mike S. tried the big ledge at the top, on the left. It wasn't working for him either, so he had to take a line much farther to the right.

Mike C. brought up the rear, driving all the way through it and proving you don't need lockers for this obstacle.

Zuki Hill followed immediately after the Washtub. We've never even stopped to take pictures here before, but one of our members (Mark G.) rolled his Jeep here while out with another group. We watched in amazement as Jeep after Jeep had to work to get up the hill. It ended up being one of those hills where you had to give it some momentum. You just can't crawl up Zuki Hill.

After that obstacle it's a little way to the first overlook. We enjoyed ourselves, though, and soon found a small group of vehicles who had lost the trail (sometimes it's difficult to find). They fell in behind us, and we'd be leapfrogging them all the way through to the beginning of Gold Bar Rim.

The first overlook on Golden Spike is one of the most awe-inspiring sights in the area, by far. You can see Moab, the La Sal Mountains, Arches National Park, Highway 191, and miles of gorgeous scenery around you. We stayed there for awhile, and no one really wanted to leave. The weather was perfect, and we all felt relaxed and happy.

We had to leave, though, so we packed up and headed out. The second overlook is good, but not nearly as good as the first one and with less room for parking. We only stayed a minute or two, and then headed out as the other group showed up.

Once we came to the Golden Crack everyone got excited to go through it. The sun was still high and the pictures would be good. We had it all to ourselves at first, but then the group behind us arrived to watch.

Don got lined up first, and immediately got a huge wheelstand. He looked pretty light, so he backed out of the obstacle to line up again. He came at it a bit more directly and that was the trick. He still got a huge wheelstand but he drove through it and popped right through the Crack.

Michael went through next, barely slowing down. His first line-up was right, and he drove right through the Golden Crack without any issues or much time spent.

Mike C. was next, and without lockers the Golden Crack is definitely more of a challenge. You constantly have at least one tire in the air, and he found that it would require a bit of luck and momentum. Still, it didn't take him too many tries until he was through it. Great job!

Bob went through the Golden Crack next, and it was obvious that he had been through it many times before. He lined up and drove right through it without any trouble at all.

Mike S. brought up the rear, getting a nice wheelstand and staying on his line like he was on rails. It didn't take our group long at all to get to the other side of the Golden Crack.

We stayed for a bit to watch the group behind us, and then we were off. No one in our group has ever gotten on the Buggy Challenge until this time, when Don and Michael both attempted the beginning. They both went up the first big ledge and then turned right to skip the rest of it. This is a new, fun line for us.

No one had to work on the Golden Stairs, with everyone popping right up each one without an issue. We all enjoyed the bits of slickrock ledges on the way to the next obstacle.

The Golden Coaster is always fun, with a steep slickrock hill at the end. No one had any issues, and we all had a great time on the obstacle.

We always try Double Whammy and no one in our group has ever made it. We've come close to making it, and even closer to breaking in it. This year was no exception.

Don got up on the obstacle and tried a few lines, but it just doesn't seem possible in a Jeep his size (short wheelbase on 35" tires). Michael gave it even more with his longer wheelbase, but with smaller tires it just wasn't working. No one else wanted to try it.

The group behind us was passing it up, and we called them over. They had much longer vehicles in their group. We watched as two of them drove right up it. No fair!

Body Snatcher always seems to give at least one of us some troubles, and this year the troubles belonged to Michael. Maybe it was his longer wheelbase, but he kept getting dangerously close to the rock that threatens body damage. He didn't hit it, though, and eventually got through it. Everyone else just drove right up.

We had fun down the last obstacle and soon we were on Gold Bar Rim. The sun wasn't even going down yet, so we were making incredibly good time. What a great day so far! 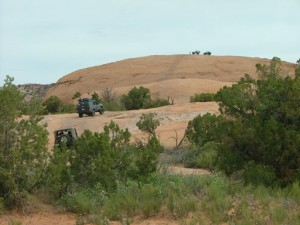