We ran this trail from Jefferson to Breckenridge immediately after running Boreas Pass. We followed it with Webster Pass.

It started out very mellow but the weather was nice so we had a good time. We got to the top pretty quickly and we got out for lunch. It was very windy and a little chilly (about 55 degrees) but you could see for miles so we enjoyed the views. You could see a lot of South Park on one end, then off toward Breckenridge ski area on the other end. There were lots of people taking lots of pictures.

We started up Glacier Ridge just as it was starting to rain. It didn't rain too long or very hard, and it managed to cut the dust down quite a bit which was good.

We could see quite a few other trails on a lot of the mountains around us. Some may have been part of the maze of trails above Radical Hill. We didn't go exploring, though that would be fun for another trip.

We came down the hill to a crossroads we had passed before, and someone needed some help around the corner. Corey and Iavor went to see if they could help, but it was past that point. Their 4x4 had died and they were alone, so the group piled into our Jeeps and we brought them down the mountain with us.

We got down the ridge and back to the pass, then headed down to Breckenridge. It got rough right away, though not too crazy. It was pretty steep -- coming the other direction would make this trail much more challenging.

We came across some slightly lost people and they followed us out. If you keep on road 355 and keep going downhill you'll find your way out.

Once we got out and dropped our passengers off, we took the steep, paved road around the near side of the Reservoir instead of going around the long way. That got us to Highway
6 and on our way to Webster Pass in record time.

This was a nice trail and it would be cool to explore the spurs for a whole day. S.O.B. Hill is up there somewhere -- we'll have to go back again sometime to find it. 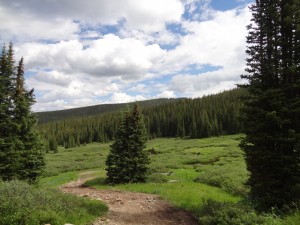