Trail Run on May 15, 2016
Report and photos by Monica I., Trail Leader
View trail information for Flint Trail

When we did the Flint Trail the day before, all of us were on it in the dark. Frank had been towing Matt up the hill, and it took a while. That meant that we didn't really get a chance to enjoy the trail, so we were happy to find ourselves at the bottom again the next day. The sun was out, and we were taking our time this time.

The hill isn't all that tough, though it is intimidating. First of all, everything you read about the trail makes it seem scary and dangerous. It would definitely be a bad idea in the rain or snow, and if we found someone on their way down the hill it would make things difficult, but not impossible. The switchbacks had plenty of room for passing.

But that doesn't make it any less fun. The first part of the hill is relatively mellow, though steep. Then you get to the big switchback and the fun begins. There are some hills that were cut into slickrock, though most are dirt or rocky climbs.

The second switchback is even tighter, with less room for passing and making multi-point turns. The third switchback is much easier, and then it's a piece of cake to get to the top. When we got up there, we were bummed that the hill wasn't longer, but it was a blast.

We'd only seen the top of the hill under pitch black skies, so it was good to see it in the sunshine. The light was fading, though, so we didn't hang out for long. We wouldn't have time to head out onto The Big Ridge this time, so we started up Gordon Flats. 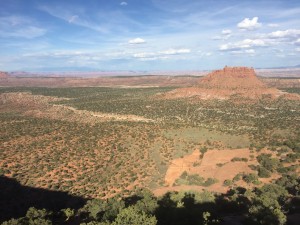 Led by Monica I.
We were a bit split up, and Ben had a big head start on the rest of us. Even though we only added a bit more trail compared to Ben, Matt broke on that bit of trail in Big Water Canyon and we were moving very slowly. Ben saw Flint…
Join Us!
If you aren’t a Member or Subscriber, you can’t see all of the content on this site. Get membership information to see why this site is best when you join and log in