Trail Run on May 14, 2016
Report and photos by Monica I., Trail Leader
View trail information for Flint Trail

We were a bit split up, and Ben had a big head start on the rest of us. Even though we only added a bit more trail compared to Ben, Matt broke on that bit of trail in Big Water Canyon and we were moving very slowly. Ben saw Flint Trail at about 5:30PM and the rest of us saw the sun go completely down while we were climbing.

Finding the bottom of the Flint Trail was easy as we'd been by it before. Ben had no issues with the trail, but the rest of the group would find it very challenging. Monica went first, calling out on the CB what was ahead. Frank towed Matt's Jeep up the hill to the first, tight switchback. It was too tight to tow someone around, so after trying a few things they realized that they'd have to disconnect the tow strap. Matt got his Jeep running long enough to get around the switchback and make it almost up to the next one. Walt brought up the rear, making sure everyone was okay.

They took turns towing and having Matt run on his own. It all worked out in the end, and we were finally up at the top. Though Ben saw the top with plenty of daylight to spare, it was pitch black up there for the rest of us. We got ready for a chilly desert night by closing up Jeeps and putting on more layers. Then we headed up Gordon Flats.

No one got any pictures of Gordon Flats or Hans Flat Road, but we'd be on them again the following day. Instead, we worked on getting off of the trail as best as we could. Frank towed Matt all the way to the pavement, and then into town.

We rolled into the campground in Hanksville at midnight, and Ben came to meet us. We chatted for just a little while, realizing that we weren't going to meet first thing in the morning as planned. It would change our schedule, but it was all good. Any day out there is a good day. Still, Ben would leave for home the next day and Matt was out for the rest of the trip. At the end of the day, it's always an adventure out there. 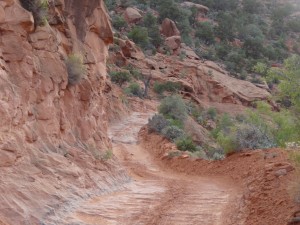 Led by Monica I.
When we did the Flint Trail the day before, all of us were on it in the dark. Frank had been towing Matt up the hill, and it took a while. That meant that we didn’t really get a chance to enjoy the trail, so we were happy to find…
Join Us!
If you aren’t a Member or Subscriber, you can’t see all of the content on this site. Get membership information to see why this site is best when you join and log in