Flat Iron Mesa was our first trail for Moab in the Fall of 2019. Matt had been wanting to run Flat Iron Mesa for some time, and now his time had finally come!

We started at the north end of Flat Iron Mesa and aired down in the parking area near the beginning of the trail. It looked like it was going to be a very nice, warm, and clear day for us.

Soon, we started making our way down Flat Iron Mesa. With only two of us, we were able to keep a nice pace. Rubble Hill and the red slickrock Dome did not give us any issues.

After the Chute, Flat Iron Mesa turned easy and we made good time until we got to Tilt-a-Whirl. We did not have any issues with Tilt-a-Whirl, but we ran into a group of Jeeps making their way down Flat Iron Mesa. We were able to ride with them without any troubles.

The last obstacle on this trail is the Intimidator and it does live up to its name. We both did great with Intimidator but spotted each other through it. We helped spot the people from the other group again as they went through the Intimidator. None of them had any issues but for the last Jeep in their group who turned too late and got himself into a tippy spot. We had another Jeep pull him back onto the trail to make sure he wouldn’t go over the side of the cliff. It all worked out and we all drove off to the end of Flat Iron Mesa. It was a great start to our Moab trip. 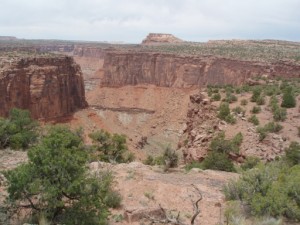