We finished our lunch at the upper kiosk and started down Fireman Hill. We wanted to make sure we avoided the tough and dangerous way down Endo Hill, but otherwise we wanted to see everything.

When we got to the intersection with the overlook trail we took it. It wasn't long before we were out of the trees and surrounded by gorgeous scenery. There were some old, burned trees around us from a previous fire, but the views were amazing. You could see for many miles past the foothills. The sky was blue and the weather was phenomenal. This section of trail was really nice.

When we finished the overlook section we headed down. The trail got rocky and bumpy as we headed down the Rocky Hill. It would be a really good time to go up this hill, and we both wanted to come back someday to do it. There were some really rocky parts, and some places had a pretty big drop-off. There were no trees, so a mistake here could be fatal. Luckily, it wasn't too tough.

When we got to the bottom of the Rocky Hill we found a newer model truck that had probably been stolen and abandoned here. Everything was gone, including the entire engine. It was completely destroyed. It was a good reminder to never leave your vehicle in this area.

We worked our way down the hill and soon found ourselves at the top of Endo Hill. We got out to check it out. It was insane! The big, dangerous line was ridiculously huge. There was no way either one of us would attempt it. The middle line had a tree blocking it, and the easy line was free and clear.

After exploring for a bit, we headed down the easier line. It was fine, though it was tippy in spots. When we got to the bottom, Chad tried to at least get up to the big wall of rock on Endo Hill but he kept getting high centered in the ruts in the dirt on the way there. It was huge, and it swallowed his Jeep. He didn't try for long, backing out to keep going down the trail.

We were soon down to the parking area at the bottom of Endo Hill and then back out to Five Points. From there, we started checking out the spurs off of Left Hand Canyon.

We're looking forward to running Fireman Hill in the uphill direction. It would be very challenging and very fun! 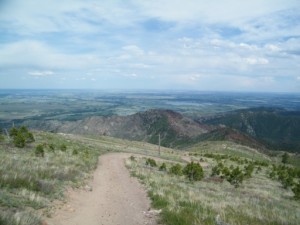 Led by Monica I.
We had just finished Castle Gulch and we were back at the Upper Kiosk. We planned on finishing the trail network by running Fireman Hill downhill. We had heard of some changes but we didn’t know what the trail looked like now. We headed for the overlook, skipping the overlook…
Join Us!
If you aren’t a Member or Subscriber, you can’t see all of the content on this site. Get membership information to see why this site is best when you join and log in