This was the hardest trail we'd done in Moab so far, so we were intimidated. By the end of it we were all grinning from ear to ear, though!

The rock hill at the start is a blast, like something that would be really hard on Colorado granite but much easier on slickrock. We sped around through the sand until we came across the first big fin.

Wow, that's steep! Our faces were a little white, our eyes were a little big, but we all made it. The squeaking tires sound really weird, like you're slipping, but you're really not in any danger of sliding when you hear it.

We had a great lunch -- what a fantastic view. We also parked and wandered down a fin on foot to a shady area. It must have been the shade but the rocks were often covered with a bluish-gray moss. Very weird stuff. This was probably the hiking trail to Morning Glory Arch but we weren't sure.

At the end of it we were exhausted but at the same time ready to do it all again! 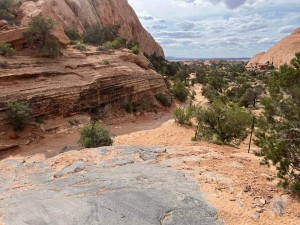