We had a big day planned in the Canyonlands National Park, and no trip there would be complete without a trip around the Elephant Hill loop. We planned on starting there first and hitting as many trails as possible before we left for Moab.

We stopped at the Visitor Center just inside the park so we could reserve our spots for other trails. Elephant Hill doesn't need a reservation, but Horse Canyon and Lavender Canyon do. We found out that Horse Canyon is still closed, but we managed to get 5 of the 8 passes for the day to Lavender Canyon. It took awhile, but everyone had a nice time in the bookstore. The restrooms were nice, too.

We were soon at the parking area next to the Elephant Hill trailhead where we aired down and disconnected sway bars. The weather was nice and everyone took out doors and put down soft tops. We soon started up Elephant Hill.

We got started and soon a single Jeep was on its way down. It looked like a BLM Jeep, and they stopped at the big switchback to let us through. That would be a great job!

Elephant Hill went just fine and everyone had a great time climbing it. We went through the sand and slickrock and soon we were at Switchback Hill.

Switchback Hill looks like it was probably quite a bit more difficult before BLM "improvements" paved over some of the sections. Still, it's a steep climb down. No one had to back up through the lower switchback, which was good.

The next few sections are a blast, covering sand and slickrock ledges and climbs. The scenery next to them was amazing, too.

We were close to the narrow section when we ended up in the middle of a lot of hikers. We could also see vehicles in front of them. We stopped for lunch just past the narrow section in a big pullout and we didn't see the other people again. It was the perfect place for lunch.

After lunch, we continued along the trail. There were sandy spots with a few bits of slickrock to break them up. The Silver Stairs obstacle wasn't that much different than all of the other obstacles. After the Silver Stairs there was a great ledge to drop down, though.

Lavender Canyon is a long one, so we decided to skip the Confluence Overlook this time. We'll have to do it next time.

It wasn't long at all before we were up and over the Slickrock Hill and down Elephant Hill. We hit the pavement and headed over to Lavender Canyon. Elephant Hill is always a blast! 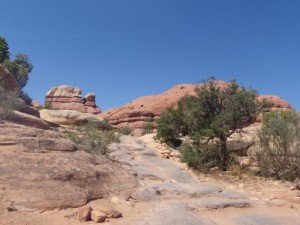