Trail Run on May 26, 2013
Report and photos by Monica I., Trail Leader
View trail information for Devil’s Racetrack

We'd been looking forward to Devil's Racetrack since we left Denver. With a name like that, it must be fun! We just finished Fix It Pass and we were at the intersection of the two trails, far from the highway and civilization. We started the trail and were surprised to find ledges and fun things to climb right off the bat. We loved the start of the trail, and we stopped at the top of the ledges to have a snack and visit for a bit. Then it was time to see what the Racetrack was all about.

It turned out to mostly be about "Shake and Bake" -- our term for a trail that lurches your vehicle back and forth, over and over, not letting you get any speed or make things smoother. They're usually in Utah, so it's usually hot and we're baking in the sun. We thought it was worse than the Shake and Bake section on Hole In The Rock, so we were okay with it. We watched landmarks like the Golden Gate and The Twin Priests come and go as we shook and baked (though the temperatures were perfect as the sun was threatening to go down soon).

There were some rocky sections and ledges while we passed by The Twin Priests, and those were fun. The trail was definitely scenic. It got more scenic as we got closer and closer to the edge of a steep drop-off. We got within a few yards so we stopped to walk over and look off the edge, but it wasn't really necessary because we'd be right on the edge soon enough.

The Drop was a nice surprise. We came down big ledges of sandy slickrock that would be a blast in the other direction. ATVs had made a bypass next to the cliff's edge, but we stayed on the trail and in the obstacle. If your brakes failed as you dropped down the ledges you'd roll straight off of the cliff. Fun!

We stayed next to the cliff as we went through the Devil's Racetrack. Then we found ourselves in The Pits. Monica got a little over her head and called for a spot, which was good because things got twisty and weird in the slickrock. That was a great time, and everyone took their turn while the others watched. Everyone got really flexy and we were all smiles.

After the actual Racetrack section the trail was a bit more mellow. There were some ledges, both big and small, mixed with sandy spots. It seemed like a quick trip to get back to the Head of Sinbad where we'd started the loop. We drove by the Dutchmen Arch and snapped pictures from our Jeeps.

Instead of taking the underpass and the longer way out, we looped around to connect with the Fix It Pass trail again north of I-70. Then we headed back out to the Fix It Pass trailhead. We aired up there, and it was dark by the time we got back to Green River. The town shuts down early and we were there a little after 9PM. Luckily, the Tamerisk Restaurant was open and served a great late-night dinner to people covered in dirt and sunscreen.

We all ended up leaving at different times the next day, trying to beat Memorial Day traffic or get more sleep. Strangely, there was very little I-70 traffic for any of us. It ended up being a great trip, even with some of the roadblocks we found early on. We'd definitely be back to explore more of the San Rafael Swell. 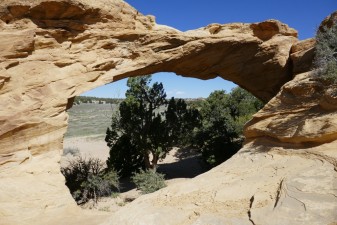 Led by Monica I.
When we did this trail the first time we did Fix It Pass first followed by Devil’s Racetrack.  It looked like it would be more fun and challenging in the other direction, so we decided to try that.  It was!  We went to the Fix It Pass trailhead on the…
Join Us!
If you aren’t a Member or Subscriber, you can’t see all of the content on this site. Get membership information to see why this site is best when you join and log in