We had just finished running Barbour Fork and were driving to Devil's Canyon, and even though Walt had the trailhead on his GPS and he was there last November we still managed to drive right past the entrance to the trail. It is easy to do while heading toward Mount Evans. We spotted the entrance as we were driving by, though, so we did not go too far before turning around.

Since we were already aired down and our sway bars were already disconnected we immediately headed up the trail. We did not go far before meeting an Xcel Energy truck coming down. Walt thought he might have seen the same truck last November.

When we reached the start of the loop we had to tackle Devil's Hill first. Walt, Brian and Matt had no problems climbing the only moderate obstacle of the trail. We then drove back down the hill to the loop.

Last November we traveled clockwise around the loop, and after a brief discussion the group decided to rebel and we did the loop counterclockwise. The weather had already brought snow to us, but at that point it was just sprinkling rain.

The group made short work of the loop and hit Devil's Hill again to head back toward the trailhead, but we just had to do a bit more exploring before leaving the area. We took the long spur down the hill and had a good time.

When we reached the trailhead we talked about doing another trail, but we decided that we should call it a day. We all drove back to Idaho Springs and aired up while Matt loaded his Jeep onto his trailer. Brian and Matt had a long drive home so we skipped dinner this time and headed for home. We were all smiling, of course, because it's always good to start your week on a trail instead of at your desk. 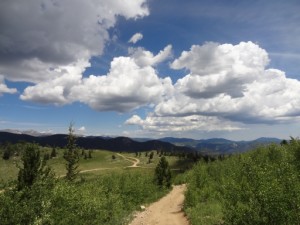 Led by Monica I.
Andy’s back! We haven’t seen him in years, so it was nice to wheel with him again. We spent most of the morning trying to find a back way from Floyd Hill to Idaho Springs via Beaver Brook Canyon Road but it ended at private property, unfortunately. Roads labeled "Jeep…
Join Us!
If you aren’t a Member or Subscriber, you can’t see all of the content on this site. Get membership information to see why this site is best when you join and log in