It was a short, three-day trip to Moab. We'd had a busy couple of days but we had to get on a trail or two on the way out of town. Copper Ridge is perfect for that, because it parallels highway 191 on the way to I-70. We thought it would be a fairly easy trip but there was some trail damage yet to come.

The day of damage started in the parking lot at the hotel when Walt backed into Ben's Jeep while it was still parked. He managed to dent Ben's rear fender and scratch his rear, passenger-side fender flare while not getting any damage to his own Jeep. He'd spend at least the rest of the day hearing about how he's dangerous. We avoided him whenever he was in his Jeep.

It was early still when we hit the trailhead. There were new developments and the trailhead was really nice. We took some pictures on the Guardian obstacle thinking that would be the last major obstacle we'd see. It wasn't.

Finding the trail was easy because we had the GPS track with us. There were lots of new signs, though, and they would have made things easier than the time we had when we first were on the trail. We wandered through dirt, sand, and slickrock sections enjoying the view of Arches National Park from the west. It was a nice morning.

Then we came to the switchback descent. It was eroded a bit more than it was when we were there last. Monica got through it, getting lots of flex. But Ben was next and his "limo" was longer and lower. This is exactly the type of twisty obstacle that would give that Jeep some troubles.

He got down to the twisty section and he was trying to turn to get through it, but he cut it a bit too close. The first rock slowly and gently ripped his rear, driver-side fender flare right off. He got out to grab it and it stayed attached to the wheel well, so the whole thing had to go. Ben threw it to the bottom of the hill and got back in his Jeep to tackle the rest of the hill.

He was definitely using his rocker guard protection next to the rocks. After trying a few different approaches he managed to get through it without any further damage. Nice job for your first time in Moab, Ben!

Bill and Walt had short Jeeps and they twisted through the obstacle without any issues, twisting their suspensions nicely. Roger had a longer Jeep and he had to negotiate the turn a bit, but he made it through just fine.

The rest of the rocky hill was perfect for photos, so we took advantage of it. Just past the hill we were on the easy Willow Flats Road for just a bit, but then we turned off of it to head back in. This is where we'd share the trail with the Sovereign Loop for a bit.

After finding the confusing area where the Sovereign Loop and Copper Ridge split again, we took the Sovereign Loop to check out the new trail. It was a nice diversion through slickrock sections and dark red dirt. When we got to the easier section on the Sovereign Loop it was one of the dustiest and dirtiest sections of trail we'd ever been on. So much for leaving Moab relatively clean.

We got to the section of trail we'd already done, and we did it again. This time, at the place where the trails split again, we followed Copper Ridge. It was pretty cool going over the big slickrock slab.

At the hill climb, Monica went up to check it out. She didn't have any issues. She parked at the top and ran down to help spot Ben if he needed it. His front differential is offset, and his pumpkin missed a big rock by an inch. He popped right up the hill without hitting anything or having any issues.

Bill came up the hill without any problems, too. Then Walt came up and he couldn't get by the differential-biting rock. He adjusted his line a bunch of times, but then he finally had to go around it to get by. When Roger came up the hill he had to be different, of course, so he followed the edge of the trail and avoided the rocks completely.

When we were all at the top of the hill it seemed like a good place to stop, so we had lunch there. We had hoped to see someone on the big slab of slickrock below us, or someone on the hill climb, but we weren't so lucky. We really had the place to ourselves, and it was a nice, relaxing lunch.

It was getting late in the day and we talked about cutting out at the intersection with the Klondike Bluffs trail. Bill said it would be a shame to come all that way only to miss the last bit of easy trail, so we decided to push on. It was a good call because the rest of the trail was fairly easy. We saw a bunch of people at the Klondike Bluffs parking area, and then we passed them all and continued on.

It seemed like it didn't take long at all to get to the parking for the dinosaur tracks. We decided to park there and just walk up to the tracks, skipping the drive up to the mine. The tracks were pretty cool, and we walked down the 4x4 trail to check it out. It was cool, but we were done. It was time to get home.

We aired up in that parking lot after being aired down the entire weekend, which was nice. Then we headed for Denver. It was a nice drive without too much traffic, and it was a great weekend in Moab. 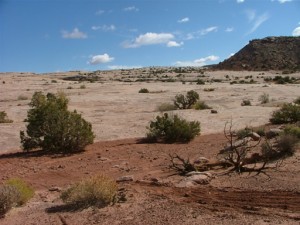 Led by Monica I.
We were going to run Moab Rim, but at the last minute we decided to run Copper Ridge instead. It was a new one for the group, and one we’d been trying to run the last three Sundays we had been in Moab. It was time, even though the weather…
Join Us!
If you aren’t a Member or Subscriber, you can’t see all of the content on this site. Get membership information to see why this site is best when you join and log in