It was a gorgeous day as we prepared for traveling a lot of miles before the sun went down. We had lots of extra fuel as we headed north on highway 191 to get to Canyonlands National Park. Hoa had some trouble with his guages on the way there but once he turned his vehicle off and back on it went away. He wasn't too worried about it so we pressed on. It was a gorgeous drive.

We stopped at Newspaper Rock to check out the artwork. We took some pictures and talked about how we couldn't believe that people would add their own graffiti to it. It was chilly there in the shade but we could tell it was going to be a nice day.

Once we got to the Visitor Center we aired down in the parking lot. Then we headed to the other side of the lot to the trail and started in. It had been a long time since Monica had been on the trail and it was a new one for Hoa and Mike.

The first part was mellow though we couldn't go too fast because there wasn't much visibility. We were happy to get to some slickrock and Hoa practiced his rockcrawling. We were just happy to be out there.

The rocks were a lot more fun than we remembered. There were shelves here and there and some fun little hills.

Route finding was difficult in spots. It would be nearly impossible in the dark. We expected more from a trail inside the park. We managed to correct our mistakes right away, though, so it wasn't a huge deal.

We had a good trip and we eventually found the end of the trail. We parked and walked around a bit, getting some pictures. Then we decided to break for lunch because it was gorgeous. We got all of our stuff and hiked it out to the end where we had a very scenic break.

But it was soon time to go back. We parked back at the Visitor Center for a break and Mike found the noise he'd been chasing all summer and fixed it (good job!). We sat in the shade at a picnic table for a bit and enjoyed the day. We don't usually take a break like that and it was really nice.

We headed over to Elephant Hill with big plans but when we got there our plans changed. But any day wheeling is a good day. 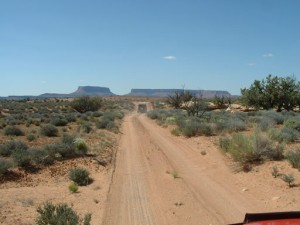 Led by Monica I.
We ran this short trail after Elephant Hill because we had some extra time and it sounded fun. Though it was very easy (especially after Elephant Hill) it was worth the drive to check out the view from the Overlook. https://youtu.be/ygZczTxv1jA The majority of the trail was dirt road so…
Join Us!
If you aren’t a Member or Subscriber, you can’t see all of the content on this site. Get membership information to see why this site is best when you join and log in