We had a camping weekend planned with some trails on the Flat Tops, and it was Monica's first weekend with her new pop-up trailer. Matt knew how to tow a trailer and how to camp with a camper, so he would be a ton of help. Walt was joining us but spending the night in a hotel in Eagle. Julie would be joining us later. We headed up I-70 and it wasn't long before we were in Dotsero, realized there is no gas station there, and doubling back to Gypsum to fill up before heading up into the hills.

The weather was perfect. It didn't take long to get on the trail, and then Monica and Walt wanted to air down. Matt wasn't airing down his truck and his Jeep was on a trailer, so he kept going. He wanted to take it slow, and he'd meet us at the Deep Creek Overlook.

We followed Deep Creek at first, and then turned away from it as the switchbacks started. There are a bunch of them, but the road was dry and the trip was an easy one. When we got to the overlook, we pulled in and we were happy to see Matt waiting for us.

We were there a while, having lunch and enjoying the perfect temperatures in the shade. A few other people came and went, and we wandered around just checking out the views from all of the vantage points. It's a really cool area.

We had a list of campgrounds we'd like to stay at, in order, and Supply Basin was at the top of the list. It was small enough but not too small for our group, and very centrally located. We wanted to get there before it was full, so we kept going. It was easy to find with GPS coordinates, though there were no signs. Websites say it has a pit toilet, picnic tables, and fire rings but it has none of that. It was a primitive site.

We got lucky, and found a group site at the end of the road that was perfect. Monica acted like a newbie camper and drove her pop-up all over the place before deciding on a spot. Matt was ready long before she was, and Walt was patient as she set things up. As soon as we were ready, we headed off to White Owl Lake. We hoped that Julie would catch up with us, but we spent the majority of the day without seeing her. It was the perfect site for the perfect weekend, it seemed. 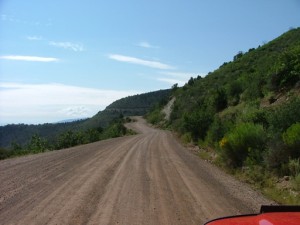 Led by Monica I.
We weren’t expecting much from this trail other than a dirt road we would use to get to other trails. We were surprised to find ourselves surrounded by gorgeous scenery the entire time. We started out and noticed that there was a lot of traffic on the road. We pulled…
Join Us!
If you aren’t a Member or Subscriber, you can’t see all of the content on this site. Get membership information to see why this site is best when you join and log in