Trail Run on May 2, 2004
Report and photos by Monica I., Trail Leader
View trail information for Chinaman Gulch

Everyone made it through the trail without any major damage other than sunburns -- you can't ask for a better day than this! A few of us were new to the trail, and all of us enjoyed it like we always do. There was a lot of minor trail damage, though, which is par for the course on Chinaman's Gulch.

The day started out early and we were at the trail a little before 10AM. The sun was already out and it was already warm even though the mountains across the valley were still covered in snow. We all aired down and disconnected and 8 vehicles headed up the trail.

We hit the Rock Garden and everyone had a challenging time weaving through the rocks and trying not to hit anything. Alanna came through without a problem, then Landon whacked his new bumper into the big rock on the left -- but no damage. Mark crawled his big Toyota over the major rock on the right, giving him a straight line through the rocks. Then Mike and Kendall weaved their way through, playing on the rocks at the top.

The most interesting show in the Rock Garden came from Jesse in his full-sized Bronco. It barely fit through! Some good spotting from Kendall got Jesse through without a scrape. Then Bob came through with new air lockers and gears using the same line Mark took.

We spent a bunch of time playing in the optional rocks near the sandy area, taking turns spotting, getting people unstuck and eating lunch. Mark and Bob made it look easy, then Kendall gave his Samurai a beating.

First he gave it his all trying to flop it on its side. It looked like it was going over but then the rocks were just too thick and they stopped him from rolling. He backed up and gave it another shot, making it all the way through. Mark parked up on the big rocks for some good posing, too.

Monica went through one direction and got hung up on her skid plate for awhile. It took a lot of rocking but eventually she slid free and made it all the way through with the usual bumper banging. She turned around and went through the other direction and didn't have any problems.

Mike came through last and got pretty hung up on his skid plate right when the group of bigger Jeeps came around the corner to watch. We got Mike unstuck and watched as the other group made it look easy (it's a lot easier with more clearance!). We let them go ahead of us because we figured we'd be the slower group. We would be proven wrong on that one.

We got to the waterfall and watched the big Jeeps finish up. We didn't get to see anyone make it up the far left line. Mark and Kendall tried that line but eventually had to go up the middle. Mark managed to smash a front turn signal and mess up his rear drive shaft in the process, though.

Landon made it up the waterfall without any problems, making it look too easy. Alanna got a little stuck in the crack for awhile, but some rock stacking and a heavy foot on the gas pedal got her through with some rocker panel damage. Bob and Monica both popped up without issues. Jesse ended up with a bent bumper and Mike tried some new lines before picking the old one and making it up.

We banged and bumped around through the river bed until we got to the far end and to the stairs obstacle. There we found the big Jeeps broken down, a tire off and everyone doing work on a Scrambler. We hung out for a bit and took the time to air down one of Monica's tires to get the pieces of tree out from the bead.

The Scrambler got going again and we were back in business again for about 10 minutes until another big Jeep got high-centered on a rock at the top of the stairs. We hung out some more until they were free and we didn't see them again for the rest of the run. Now it was our turn to play on the best obstacle on the trail.

Monica went first, taking the center line and making it up with only a second of spinning tires. Mike came up, got high-centered, then tried again and didn't have any other problems.

Kendall tried the big left line in his little Samurai but that wasn't happening so he backed down with a little trouble then went up the center line.

Jesse tried the center line but had some issues getting that big Bronco up those short stairs. He heard air hissing and backed down to a completely flat rear tire. We stopped for a bit as Kendall plugged up the hole and Jesse tried some more. He eventually ended up with some rocker panel damage too for his efforts.

Surprisingly, the roughest time we had on the whole trail was after the stairs in the chutes made of rock with the dangerous rock sticking out to grab your window. Monica played it close to that rock, sneaking up the left side without a scratch. Landon did the same line but ended up catching his rear door pretty hard giving him a pretty good sized dent and scrape.

Alanna had to wrestle with it for a little bit but made it up in style, completely breaking off her hitch cover. Mike made it look easy, then Kendall gave it some gas and made it through. Bob crawled it effortlessly too.

Then came the fun part. Jesse's Bronco was just about as wide as the obstacle and weighed a ton. The best line was up the right side but the weight of the vehicle kept making it slide down the sandy rock (the non-beefy tires weren't helping either). He gave it a lot of good tries but eventually realized it wasn't happening. Unfortunately the Toyota was behind him -- the biggest vehicle after the Bronco.

Bob hooked his Wrangler up using a tow strap and we couldn't believe it as the much smaller vehicle pulled the Bronco up a hill through an obstacle. What made it even more interesting is the Bronco wasn't even running -- it wouldn't start. Bob towed Jesse to a flat place and some WD-40 got it going again.

The rest of the way out was mellow until we hit the Rock Garden again. Kendall stood on a big rock and spotted Jesse into one rock, then another rock (one of those 10-foot rocks actually moved a little he hit it so hard). Jesse managed to mess up another corner and flatt
en his tire again. It was time for the spare tire that was smaller than the other three.

We made it off the trail and half of us went to the Coyote Cantina for dinner. 9:30PM and we were headed for home, all of us sunburned, exhausted and happy. It was a great day!

Reports from Other Days: 24 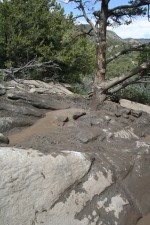