China Wall was the first trail for the day. It look like it was going to be a very nice day, but on the cool side. Most of us met at the trail head for China Wall, and we were airing down when another group of 20 or more Jeeps started to pull in, too. After we finished airing down, we went down the trail just ahead of the other group that was airing down. Some of them had camped overnight. Behind the other, big group of Jeeps we found the last two people of our group, AJ and Frank.

Soon we were on the way down the China Wall ahead of the big group. We stopped for some pictures at the Rocky Hill, and to get out and warm up. It was a fun time of visiting. After that, we all went through Rock Garden with no issues at all.

Most of us played on the Posing Rocks. Frank's Jeep slid off the rock and the rock removed the air canister from the bottom of his Jeep. He pulled off to the side and was able to slide the air canister back into the mount. The rest of us escaped without any damage.

Soon, we were going down Tippy Rock for some good pictures. No one had any issues with Tippy rock or the Rocky Hill, so we cruised right through those.

At that point, we could see that there was no one on the Rock Slab. We all went up the fun and steep bit of rock, and it was fun to watch. Some of us went to the right side of the Rock Slab, and the long-wheelbase vehicles went to the left side.

After the Rock Slab, we went down to the bottom of the hill by the river and had lunch. It was a nice time. 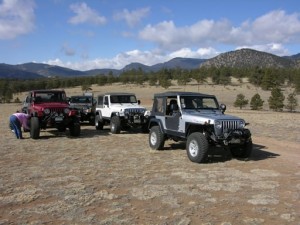