We came off of the end of the Eagle Rock trail after doing Mount Baldy, and the skies looked like they might give us a break and show the sun a bit. There were other people at that intersection who asked for directions, but after that we headed into the trail with just the three of us. The initial creek crossing was shallow, and we saw fresh tracks going up the illegal routes in the wet dirt and mud. It was a mess.

When we got to the rocky creek crossing we were happy to find the challenges. The rocks were big and slick with mud and water. The trail followed the creek for a short distance and we found an SUV with flashing lights on the other side. They said they were on the trail to do a vehicle extraction farther down the path. We never saw another vehicle come out, and we never saw evidence of a struggle anywhere even though we looked.

The climb up to the ridge was fun, and we got out to check out the scenery once we were up there. It wasn't as chilly or windy, which was nice. We looked out over the mountain ranges in layers and it looked like there was a distant range of impossible heights that we could see from where we stood. It was an illusion because we were on a tall peak and there were shorter peaks between us and that range. We thought it was a trick the clouds were playing on us until we realized the illusion.

The rocks on the way down were a blast, and the bigger ones didn't give anyone any issues. The mud in Bull Park was sloppy but not very deep or challenging so we went to the other side and up the last ridge to the pancake rocks at the end. The sun was coming out and it was gorgeous.

You could camp up there, and we only found one fire ring. It would be a great place to set up a tent. We got a kick out of Gravel Mountain and how weird it was. We actually hung out for a while just taking pictures and enjoying the scenery.

We had talked earlier about doing another trail, but it was 6:30 by the time we got back to Gold Camp Road. The other trails would just have to wait until next time. Even with the rain, hail, and chilly temperatures we had a great time. We'll be back, of course, and it was good to add Mount Rosa to our list of options.

Use the arrows or dots to flip through the previews of the other reports for Bull Park. Click one of them to read more and see all of the photos from that day. 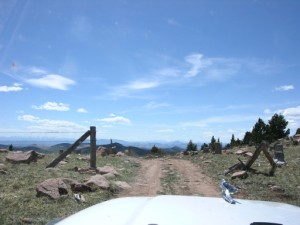 Led by Mike S.
We had already done Saran Wrap and Eagle Rock, and since Eagle Rock ends where Bull Park begins it’s an obvious choice to add this to the day’s trips. We all had fun splashing though the water crossing. Although no one made a huge splash, Gary did manage to get…
Join Us!
If you aren’t a Member or Subscriber, you can’t see all of the content on this site. Get membership information to see why this site is best when you join and log in