We started the day with Boreas Pass, followed by Georgia Pass and Webster Pass. We ended up crossing the Continental Divide four times (including the initial pass through Eisenhower Tunnel). The trail was little more than a dirt road but the old town of Boreas was interesting and we had gorgeous blue skies and big mountain views the whole way.

It was very easy to find in Breckenridge and we started up right away. A few people aired down to make the ride easier, though the road was very smooth. We stopped for a little while at Bakers Tank to check out the scenery, then we headed up to the top.

Once at the top everything was closed but we read the signs and took some pictures. It was really windy and pretty cold (about 55 degrees in August), but the sun was out so that helped.

We worked our way down without any issues and didn't bother airing back up or reconnecting sway bars on our short trip down to Jefferson and the start of Georgia Pass. 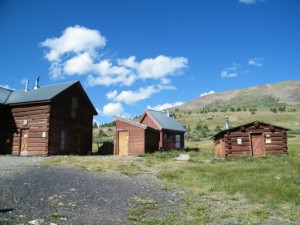 Led by Monica I.
We had discussed doing different trails, but it was getting late and many people in the group hadn’t seen Boreas Pass before. So we finished the Twin Cone trail and worked our way from Kenosha Pass to Como to run Boreas Pass up to Breckenridge. With all of the rain…
Join Us!
If you aren’t a Member or Subscriber, you can’t see all of the content on this site. Get membership information to see why this site is best when you join and log in