Trail Run on May 26, 2013
Report and photos by Monica I., Trail Leader
View trail information for Black Dragon

None of us had been off the pavement in San Rafael Swell, so we were all really looking forward to the day. We stayed in Green River the night before, so we were at the trailhead in the morning. Luckily, we had the GPS coordinates for the trailhead and we found it easily. There was lots of parking room for us to air down and get ready. We couldn't wait to find out what the day had in store for us.

We followed signs to Black Dragon Wash and headed into the cut into the rock. This definitely wouldn't be a good area to be in during a flash flood. Signs noted that camping wasn't permitted, which was probably smart.

We soon came to the fence that marked the area of pictographs. It was deep in the shade from a big overhang of rock in the alcove, and we were really enjoying cooling off already. We signed the guestbook and took lots of pictures. The area was defaced, of course, but we could still see the black dragon drawings high on the wall.

We had a lot of miles planned for the day, and though we wanted to hang out in the cool breeze we kept going. The trail through the wash was a great time, offering smooth sand and bumpy sections of fun. We were just getting started playing on a line of rock when some ATVs came from the other way. They stopped to watch, and of course Jeffrey got stuck. It always happens when strangers are watching! He broke out the winch, got a little tug, and got to the other side. The ATV leader tried the rocks but they were too big. Everyone was happy, smiling, and having a great time. We'd see many more ATVs before the day was over, and everyone was so happy to be out there.

We had fun with the rest of the wash, and soon we were climbing out. We could see an overlook on I-70 just across the narrow wash next to us, and we could make out cars and people. There were huge lights to light up the pull-out, making the area easy to find on the highway on the way home. Roger said he goes through the area on the highway fairly regularly and he knew of the overlook. He had no idea the trail was right there, but he'd watch for it next time he was on the road.

We kept cruising along enjoying the scenery. We were enjoying it so much that we missed the turn to Swazey's Leap, a trail we had planned. We were out at the scenic area having lunch before we realized it, and we decided to save it for another time.

Lunch was at a really nice spot. We could see the highway in the distance along with a lot of big and impressive scenery. It felt isolated. Walt showed us his new ARB cooler that ran off of Jeep power, and he told us he could even run it as a freezer. He promised to bring us ice cream sandwiches at some point (don't forget, Walt, you promised!).

After our scenic lunch the trail was pretty mellow, though it stayed very scenic. The weather was perfect, and we were enjoying the day. We found one spur to the highway permanently closed with a fence, so we ended the trail at Buckhorn Draw Road. We consulted with the kiosk next to the highway exit and made our next plan of attack. We headed under the highway at the exit and made our way to do the loop of Fix It Pass and Devil's Racetrack. It was a great start to a fantastic day. 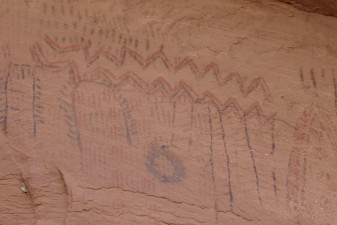 Led by Monica I.
Monica’s Jeep was in the shop, so she was riding with Mike and taking photos.  She needed some time in the morning to get it towed from its resting place on an onramp to I-70, dead and missing a serpentine belt.  Once it was safely in the shop, we headed…
Join Us!
If you aren’t a Member or Subscriber, you can’t see all of the content on this site. Get membership information to see why this site is best when you join and log in