We had heard a lot about this trail and we knew someone had just fallen off the trail to their deaths so we were all a little wound up. The weather was also a little misty and rainy so it could be a slick trail. The weather ended up cooperating and it was sunny and dry past the pass so we ended up with a great day and a great trail.

We managed to find the trail without any backtracking, thanks in part to following a truck turned into a tour bus full of tourists. They probably had no idea what they were in for! The driver even backed down some of the switchbacks and ran the trail very quickly.

We got to the pass right away and got out to take lots of pictures. It was windy and pretty chilly so we moved on. The trail goes down to a switchback, then around Ingram Basin. Mike S. stayed on the switchback while the rest of us kept going around to the other side, and we took pictures of each other. What a view!

We could see Telluride really far away down the valley as we started going down again. The switchbacks were fairly mellow and we all thought it wasn't going to be too bad. Then we saw the big rock switchback above Ingram Creek.

When you see it you are really going downhill at a big angle so it's difficult to stop, so you have to keep going. It's narrow, but the big issue is how steep it is. It forces you to look over your hood and straight ahead is Telluride thousands of feet away through the air. If you fell off the trail here there is no way you would survive, so it really gets your heart pumping.

Everyone made it, of course, and we were all pumped up when we got around the corner and the next switchback and ended up at the crossing of Ingram Falls. Everyone took even more pictures and we breathed a sigh of relief.

We'd all read about the "worst" obstacle yet to come, the tight switchback. Mike C. had done the trail before and he told us the worst of it was definitely the switchback we had already done above Ingram Falls.

When we came to the big switchback it was definitely tight and you really had to pay attention, but it was most definitely not as bad or as scary as the other one. Trees would stop you fairly soon if you went off the edge here. Not right away, but soon. It would be difficult in a full-sized vehicle, for sure (but so would the other switchback).

Once we got past the tighter switchbacks it was pretty easy to make our way down. We didn't check out the Powerhouse at Bridal Veil Falls because there were already a lot of vehicles blocking the road. We kept going and ended up at the Pandora Mill at the bottom fairly quickly. You can see the tailings ponds for a long time from the switchbacks, so you can tell where you'll end up eventually.

What an amazing trail! I think it scared each of us from a little to a lot, but it's one you can't pass up. 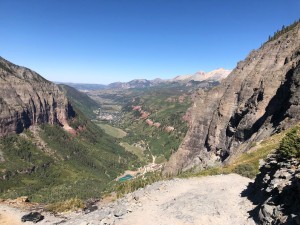 Led by Matt K.
It was going to be a nice, warm, and sunny day in early September, and thankfully it was not very smokey or hazy in the area all weekend. We met in Ouray and then drove to the beginning of Black Bear Pass, which was just a few miles off the…
Join Us!
If you aren’t a Member or Subscriber, you can’t see all of the content on this site. Get membership information to see why this site is best when you join and log in