Robert and Ladd headed for home and Don and Monica headed off to run Bangs Canyon before going back to Denver. It was a gorgeous day as we aired down at the staging area and started in along the trail.

We had run Bangs Canyon in 2004 but we were soon turned away by the wet clay on the trail. It was impossible to continue at that time. We hoped that we would find a dry trail.

We played on the slickrock, missing Moab. When we got to the Playground we found two people putting a Cherokee back together. It had been there since the day before and they were just finishing up an axle repair. We played a little bit in the Playground, but we knew we had a lot of trail to explore so we didn't stay long. We soon headed out.

We parked at the Rough Canyon Falls area and hiked in for a bit, but there weren't any signs or cairns or much sign of a hiking trail. The waterfall is seasonal, and we assumed that the dry area we found was where the falls are when they are flowing. It was dry at the time, though.

We enjoyed the slickrock sections as we kept going, playing on the rocks. This would be a little too challenging for some SUVs.

When we got to the clay area we were very happy to find it dry and safe. We were soon past the point where we had to turn around in 2004, and we were in new territory.

When we got to the left turn for West Bangs Canyon, we took it. The first obstacle is right near the intersection and it was quite rocky. This would turn away almost all stock SUVs, unfortunately.

After the rocks, the rest of the spur was very easy. We were going pretty quickly, and soon came to the end. The trail continued, with no signs. We followed the same multiple tire tracks down the switchbacks to the river, enjoying the view.

We crossed the end of Billings Canyon and came to a crossroads next to the river. The trail to the right had a gate, so we continued up the next hill and out of the canyon.

When we got to the top, the views were amazing so we stopped for lunch. It was a little cloudy, making it a great lunch out of the sun. There wasn't much shade on this trail. We even got a few raindrops, but nothing to get us out of our chairs.

It was a great lunch with a great view, but soon it was time to go. We continued up the hill and we soon intersected with the big trail that goes on the north side of the Billings Canyon trail. It wasn't long before we passed Billings Canyon and we were soon airing up next to the pavement.

We headed for home, having a great dinner in Eagle. This was a cool trail and one we'll probably do again when we do Billings Canyon. The beginning part through the Playground is definitely worth it. 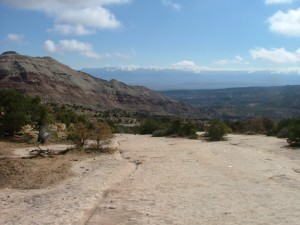 Led by Monica I.
After a rainy day the day before we were treated to sunshine all day as we played on the trail. We had a blast at the playground but we only made it a little way into the clay until it was too slick to continue. It was a great 3.5…
Join Us!
If you aren’t a Member or Subscriber, you can’t see all of the content on this site. Get membership information to see why this site is best when you join and log in