After a rainy day the day before we were treated to sunshine all day as we played on the trail. We had a blast at the playground but we only made it a little way into the clay until it was too slick to continue. It was a great 3.5 miles, though!

We aired down and got on the trail, expecting lots of people there for Labor Day Weekend. We ended up only seeing one other truck on the trail and we made the first tracks in the mud. The start of the trail was filled with mud puddles in the deep ruts in the sandy dirt, and we watched the clouds roll out to be replaced with blue skies.

The views were incredible and looked so much like Moab it was amazing. A lot of it looked like the small trees on Porcupine Rim. There were also the big slabs of rock that you see out there, and the trail was marked with white rectangles painted on the rock, making it really easy to find.

We took the "difficult" route at the fork, putting us on the stairs. There was one set that had pretty tall stairs, but we all got down them without any trouble. Then we were in the playground.

Robert was the only one to try the big obstacle, and he made it up and down it multiple times, in addition to the big stairs next to it. It was great to watch him, and he didn't get any trail damage.

Monica, Bob and John all played up and down the other slopes of slickrock. There was a little scraping on the way down the steep one (and it's pretty steep!) but no damage.

Robert's power steering was making a lot of noise so he checked it out, only to find his fluid was almost gone. He decided to run back to town to get more, then come back to catch up with the rest of the group.

We continued on, following the sign that said "trail" after the rock hill, pointing to the right. This took us to a sandy area that was flat and large. We got out to check it out and there was a hiking trail there that went down to the canyon floor. The sign said hikers and motorcycles were permitted, but upon closer
inspection you could tell that someone had peeled off the red line through the motorcycle icon. Only hikers were permitted on that trail.

We continued on in the sand and soon found ourselves climbing up a rocky trail. There were a few bigger rocks to either drive over or around, and we all picked fun lines. Then the sand started to turn to mud.

We got to one obstacle where there was a big rock at the top (too big to straddle for us). It was really hard to get around and impossible to get over because the mud was starting to mix with clay and it was extremely slick. John went last and had it worst because Bob and Monica had really made it slippery.

We all made it past the rock and kept climbing. Finally we made it to the true clay and it was very wet. The clay on the sides was still shiny with water, though it hadn't rained since the night before. It was slick and Monica had some issues but we finally got to the bottom of the switchbacks.

Monica tried to go up the first clay switchback but it wasn't going to happen. From the place where she was stuck she could see the other switchbacks and it looked way too dangerous on slick clay.

Bob gave it a try but it wasn't going to happen for him either. That's when Robert caught up to us again. We decided this was a good place for lunch so we took a break before heading back down.

When we got back to the playground we all played on the biggest stairs on the trail. With the sand on them they were pretty challenging and fun. We made it back to the trailhead without any issues.

This trail is a blast and we hope to see the rest of it on a day that isn't so sloppy. 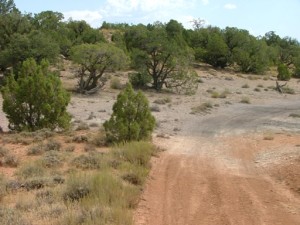 Led by Monica I.
Robert and Ladd headed for home and Don and Monica headed off to run Bangs Canyon before going back to Denver. It was a gorgeous day as we aired down at the staging area and started in along the trail. We had run Bangs Canyon in 2004 but we were…
Join Us!
If you aren’t a Member or Subscriber, you can’t see all of the content on this site. Get membership information to see why this site is best when you join and log in