We had fun playing in the snow. About halfway down the trail the snow started to get deeper and deeper. We were going through many snow drifts that were all at least two feet deep.

We stopped for a short break, and saw that we would probably run into the first group of four-wheel drive trucks that went down the trail before us. So, after the short break, we went 50 feet or so and ran into the group of three trucks and Jeeps.

The first Jeep in the other group was stuck in a four-foot snow drift. They worked on getting the Jeep out and then towed another truck out of a drift.

We went a short way down Balanced Rock Road past the group and then stopped for lunch. We looked at what was ahead of us down the trail. There were more snow drifts at least four feet deep, but this time going uphill. We all had lunch and talked about what to do, and then we turned around and called it a day.

On the way out, Walt got really stuck. Matt tried to pull him up the trail with no luck. His Jeep would just not move in the deep snow. So, Roger pulled him out from the rear back down the trail. After a few tries and different lines we got Walt and Roger up the hill through the deep snow.

The rest of the way to the beginning of Balanced Rock Road went well because none of us got stuck, but it was slow going at times. The snow was getting very wet and slick. But, we all had a fun time. We headed back over to Mount Herman Road to head for home. 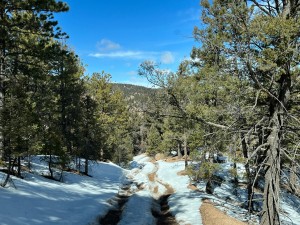