Alta Lakes was the second trail for the day after doing Black Bear Pass. We thought it would be nice to have lunch by the lake.

As we went up the mountainside towards the lake, Matt started feeling his steering was starting to have some bumps, but it was not all that bad. So, we just kept going towards the lakes.

This was also a heavily visited road with lots of vehicular and pedestrian traffic. We did not stop at the old town site of Alta, where there are lots of signs prohibiting entering the old buildings which are privately owned.

Soon, we had made it to the first Alta Lake. We stopped next to the lake by some trees to have lunch. After lunch, Matt went to look over his Jeep, and he found the PSC steering actuator bracket at the axle had broken off. That's what was causing the bump-steering feeling.

Matt removed the rest of the PSC steering from the jeep and tied the actuator up with some bailing wire so it would not hit anything when he was steering. This was a good enough fix as most of his steering still worked okay and he was able to continue for the rest of the day's trails and even run Imogene Pass the next day.

After a drive around Alta Lake, we went back down the Alta Lake trail to the start and then continued to the last trail of the day. 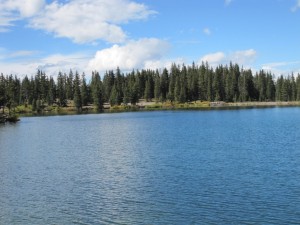 Led by Roger R.
We had just come down from Ophir Pass, and the Alta Lakes trailhead was very close by and easy to find. We immediately began climbing into the trees, and it was shady and relaxing. Once we popped out of the trees, we were at the old Alta townsite. There were…
Join Us!
If you aren’t a Member or Subscriber, you can’t see all of the content on this site. Get membership information to see why this site is best when you join and log in