We ran the Yankee Boy Basin trail right after running Imogene Pass. The weather was cooperating, and it was only about 2:00PM. We worked our way up from the Camp Bird Mine taking in the scenery, including some fall colors and the waterfall on Sneffels Creek.

The two Jeeps headed up, and soon the trail got a little rocky. It wasn't anything like the descent down Imogene Pass, though. There were no shelf roads and nothing seemed too dangerous, so we just enjoyed the mountains and meadows surrounding us.

We climbed to the top and stopped at the large parking area there and took in the views. You could really see for miles up there. We spent some time at the top, and then headed back down. On the way down, we detoured past the Blue Lakes.

The trail ended up being a pretty quick run. We wished that we had visited Yankee Boy Basin earlier in the season, either in late July or early August. The wild flowers are really fantastic that time of year. Still, it was very scenic and we enjoyed it. From there, we went to explore Governor Basin. 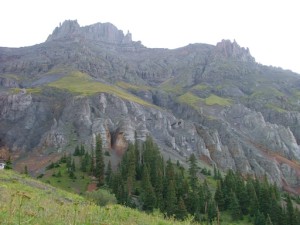 Led by Monica I.
We ran this trail right after running Imogene Pass. Though the rainy weather was really coming in at that point the trail ended up being a major highlight. The first stop was the waterfall on Sneffels Creek and we spent a lot of time exploring and enjoying the beautiful scenery….
Join Us!
If you aren’t a Member or Subscriber, you can’t see all of the content on this site. Get membership information to see why this site is best when you join and log in