Tower Arch was one of the first trails we did as a group in Moab a decade ago, so it was nice to visit it again. We found it in the middle of the trail when we finished the Eye of the Whale trail, which was handy. We headed southwest on the mellow sand.

The trail was nothing compared to the Cache Valley trail we'd done earlier, but it had its fun spots. It was a really nice drive, and the scenery was really great. We soon found our way at the end of the trail in the big parking area next to the arch. Monica had done the hike before so she hung back to take pictures of the hikers as they worked their way to the arch.

It's funny how small the arch looks when you first see it, because it's actually pretty big when you're under it. Everyone walked around exploring the area and finding Parallel Arch next to it. The weather and the scenery were both perfect, and everyone just relaxed.

When the hikers got back we all sat on a big rock talking and being mellow. It was our first day in Moab this trip and no one ever wants to go back to town. Still, Walt was waiting in town so we headed back in. We had considered mapping out the entirety of Salt Valley Road, but when we got to it at the Tower Arch trailhead we just decided to head back.

We got to the Balanced Rock parking area at sunset, so we stopped with a lot of other people to snap some pictures. It was a really nice sunset, and we left in a big mob. That meant we were in a long line of cars on the way out, which was kind of cool.

When we got back to town we found Walt all fixed and ready to go. We had dinner at our favorite Mexican restaurant and headed back to our wonderful stay at the Adventure Inn. It was an incredible day!

Use the arrows or dots to flip through the previews of the other reports for Tower Arch. Click one of them to read more and see all of the photos from that day. 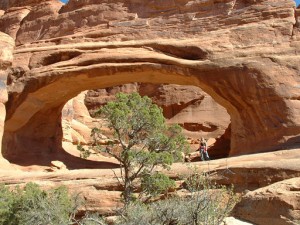 Led by Monica I.
We ran this one to check out an arch — we had been to Moab before but hadn’t done any trails with arches. We also hadn’t seen Arches National Park before so that was cool too. The dirt road isn’t that fun. It’s all washboard and really bumpy for what…
Join Us!
If you aren’t a Member or Subscriber, you can’t see all of the content on this site. Get membership information to see why this site is best when you join and log in