Though it's not a difficult trail, Switzerland Trail is special because it's scenic and interesting. Along the way, you can imagine what the train ride used to be like as you wind your way between blasted rock and along the edges of steep drop-offs. The cloudy skies were cloudy as we came off of Sugarloaf Mountain to do this trail from the east side.

We planned on going up Pennsylvania Gulch, so we did the southern half of Switzerland Trail on July 2nd, followed by the northern half on July 3rd. We had better weather on the 3rd, but it was a relaxing trip on the 2nd because it was cloudy.

The southern half isn't too exciting, though there are some nice views. We saw a big patch of columbine flowers, and we were looking for another connector road that was close to Pennsylvania Gulch. It was on the Motor Vehicle Use Map, but in real life it was long closed. We cruised up to Pennsylvania Gulch and did that on the way out.

The next day, we started near Gold Hill to do the northern half. The skies were blue and the trip was really scenic. We had lunch at the picnic tables at the Mount Alto site, and then we headed back out.

We did Pennsylvania Gulch again, two days in a row. It's that good! Switzerland Trail is a nice, scenic trail and we enjoyed both days of it. 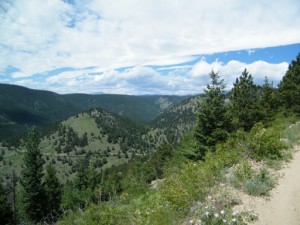 Led by Monica I.
Switzerland Trail isn’t one we think of running very often. It’s pretty mellow and it’s usually crowded, so we usually opt for trails a little further from Denver. But TrailDamage.com started 10 years ago in June of 2000 when Monica was testing her stock Jeep Wrangler. That Jeep was sold…
Join Us!
If you aren’t a Member or Subscriber, you can’t see all of the content on this site. Get membership information to see why this site is best when you join and log in