The sun was out and there wasn't a cloud in the sky, so it was a great day to head for the hills! It was time to check out Slaughterhouse Gulch as summer approached, but this run had an additional mission. We talked to the forest service and found out that a new gate was installed but we didn't know exactly where it was. They said that the gate was closed while they made some changes, but they weren't specific about what the changes were. The forest service said that the trail was accessible now and the gate was open, so we went to go see what changes had been made. Unfortunately, only Walt could make the trip.

After airing down, Walt took off to check out the trail. Just a little ways up the trail there was a new seasonal gate, within a short walk of where we usually air down. The trail may have been closed a few weeks ago but it was open today, with an open gate that wasn't vandalized.

Walt decided to head for the mud pits first, to see if there were any additional new gates or changes to the status of the pits. The beginning of the trail on the way there was dry, but before long the trail changed. It soon was just a little wet and showing signs of the snow storm a couple of days ago. Once Walt got into the trees, a little snow nearly always covered the trail.

After passing by the usual entrance to the Slaughterhouse Gulch loop (the "Y") Walt discovered he was making the first tracks of the day in the section between the "T" and the "Y" on the loop. After the "T" where you usually come out of the loop, he was making the first tracks in the snow toward the mud pits. There were no additional gates or changes, and soon he was at the mud pits.

Walt decided not to go into the mud for fear of not getting out, as he was alone and there aren't any winch points. Instead, he headed up Crow Creek Road past the mud pits. Walt didn't get far, though. About a half-mile up the trail past the mud the snow was getting deeper and deeper, and he decided not to take any chances. He turned around and headed back.

He passed the mud pits and the "T" intersection, and then when he got back to the "Y" he went the normal direction to do the Slaughterhouse Gulch loop. This time the snow turned him around about two-thirds of a mile up the trail. The loop wasn't going to happen today.

Back at the trailhead and airing up for the trip home, Walt was happy just to be in the hills again even though he didn't get to do the loop. It's a new season of wheeling!

Reports from Other Days: 15 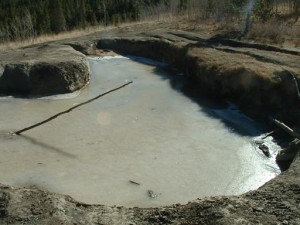