Trail Run on May 29, 2004
Report and photos by Monica I., Trail Leader
View trail information for Saran Wrap

We had a great group of people on this run -- most of the people were new to the group and Brian E. had a newly-lifted and beefier Jeep to try out. We met at the Home Depot, aired down, and got on our way. It started out a little chilly and it kept getting chillier as it snowed off and on.

We disconnected at the Eagle Rock entrance and then went on to the start of Saran Wrap. Everyone made it up the first loose dirt hill and Mike had to try a few lines before he got his Toyota to the top without too much trouble.

We all worked our way through the rocks till we got to the intersection of the "Low Road" and "High Road" and we made our decisions about which we would take. Monica went first and experimented with a few lines at the top of the Low Road before making it through.

We had lunch where the two roads intersect and then it really started snowing. We all had on whatever tops and doors we brought with us but the snow was just barely snow (almost rain) so it was getting everything wet.

We left lunch and went down to Eagle Rock at the intersection. We got in line at the big dirt hill next to the Eagle Rock entrance and most of the group went up to the top and came back down.

Most of us went on to run Eagle Rock while a couple others went back to town. It was a great run even though we didn't explore any spur roads this time. 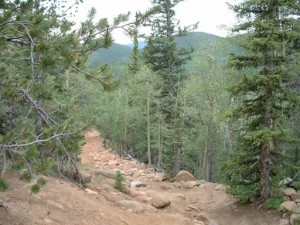