We had a nice, tight group of Jeeps and we ran all over the trails to find a lot of loops as well as dead ends. There was some Trail Damage, including the complete blow-out of Adam's rear axle on one of the spur roads.

There were a couple rocks in the trail that formed a pretty steep ledge with a lip on the top. Adam's front tires ended up under that lip and his back tires with the locked axle just kept going, effectively separating themselves from the rest of the Jeep. It was crazy to see! Luckily Adam knows what he's doing and fixed it all right there on the trail.

While they were working, Monica went ahead to scout the trail and got stuck too. It turned out she'd found one of many dead-ends but needed help getting down from the steep hill.

We spent a lot of the day on Saran Wrap, with Mike sliding sideways a bit down two hills and Adam making it out just fine. Adam and Brian went back to Colorado Springs to get the Jeep fixed and Ladd, Mike and Monica went on to do Eagle Rock (finally).

This is a fun trail and you could spend all day exploring. Eagle Rock is pretty short so you have time. 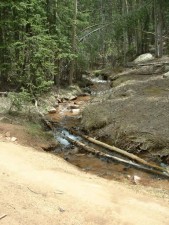