Even though coronavirus restrictions were still in effect for Colorado, the start of Rock Creek was just as crazy-busy as it always was.  There were people camping in every available spot of dirt, cars everywhere, people everywhere, and no one was wearing a mask.  It was very green and lush for Colorado, so that meant there would be mosquitoes.  We've never really understood why people wanted to camp here, but to each their own.

We got through the campsites easily enough, and then we had the trail to ourselves for a bit.  We were headed up to the first switchback when we saw a tour Jeep coming down.  It was a TJ just filled with people on a tour.  They found a pull-off spot and we got around them easily.

At one of the switchbacks, we backed into one of our favorite campsites on the trail.  It was empty.  There are benches and lots of room, and though you wouldn't be next to the creek (or the mosquitoes), you could still hear it.  We hung out there for a while, snacking and chatting.  It was shady, and the temperatures were just about perfect.

We were looking forward to the flexy section of rocks we went through the last time, but when we got there the holes were filled with smaller rocks and it was pretty flat.  We imagined underequipped cars and small SUVs needing to stack rocks to get through it.  It was a bummer, because that was the only challenge.

That meant it was a bumpy ride to the top with only a few places to have a bit of fun.  When we got to the top, vehicles were everywhere but we didn't see any people.  We stayed for just a bit, but the sun was on its way to setting and the mosquitoes were coming out.  We turned around and headed back out.

We stopped in Allenspark for some pizza and to air up in the parking lot.  It turned out to be a 90-minute wait for a pizza, so after airing up we headed out.  It was a great day in the mountains with new members! 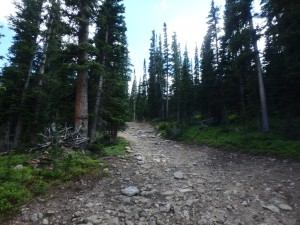