We had really been looking forward to Pritchett Canyon after our eventful vacation in Moab. The weather was perfect and we only saw one other vehicle on the trail. It couldn't have been any better -- until Cheryl's Jeep broke at the end.

We got started at a decent time and everyone paid at the gate. Cheryl led on the trail this time. We had a great time getting warmed up on the big rock near the start of the trail.

Everyone played on the various ledges and it wasn't long until we were at Which Way. Cheryl picked her line up it, a little to the right of center. It got tippy in the middle, but she made it up just fine.

Monica went up the middle and though it got tippy for her too she also made it just fine with some great spotting from Don.

Dane went next, and he decided to do the line on the far right. It's safer at the top because of the big rocks that prevent you from rolling over, but it's really tippy. It really required his lockers and big tires to get through, especially at the very top. It was a crazy line but it was very cool to watch.

Dave went next, following Monica's line up the middle. He drove right through it without any issues.

Bruce followed, and he also drove up the middle. His longer wheelbase really helped, and he barely got tippy in the middle as he drove up it like it was nothing.

Bill brought up the rear and had a dramatic start near the bottom of the obstacle, but then drove up the middle without any problems.

We enjoyed the trail for a bit, then stopped for a quick lunch. The views in the canyon were really nice, and we enjoyed the sunshine.

We came to the Tube pretty quickly, and Cheryl started right in. She made it look easy as she got her front tire on the big rock near the end, then her rear tire too. She was really tippy but she drove right through it. Nice!

Monica had some issues at the start of the Tube, but then got through it just fine. She didn't try the big rock at the end, and popped right up and out of it.

Dane flexed his way through it, making it look easy. Dave got a tire up on the big rock near the end, getting some great flex. Bruce and Bill drove right through it with ease.

We soon got to Damen's Hot Tub and found a lot of water and mud at the bottom. Cheryl tried to get up on it but it was really slick. She tried a few lines but then had to take the easier left line on the way out. Even that was difficult when wet.

Monica tried the hard line a few times, but it wasn't going to happen. She sprayed some mud around, then gave up and tried the line on the left. She almost made it, but without a front locker it was just too slick. She took a tug from Cheryl to get out of the obstacle.

Everyone else went around it after that display, so we were off to the fun at Rocker Knocker. Cheryl got up on it and right away she was up to the top and through it. She made it look so easy!

Monica almost got to the top but had too many issues. She ended up with her rocker guard up against the rock on the left end and her rear tire tucked under it. She made use of the new winch point and winched herself the rest of the way.

Dane got in the obstacle and right away he got really tippy near the exit point. He carefully backed out of it and tried again, only to end up tippy like before. He'd had enough of that fun, so he winched himself out.

Dave decided that finesse wasn't working with the wet, sandy rock. He went at it with a bit of the gas pedal, scaring everyone into thinking he was going over. He stopped to regroup, then just crawled the rest of the way to the top. It was definitely a dramatic thing to watch.

Bruce found his line and it didn't take him much effort at all to drive up it and then pop right out the top. It was impressive.

Bill came up last, and he only had to reposition a couple of times before he found the right line. It wasn't long before he was up and over the obstacle.

We kept going as the light faded, and soon we were starting the string of the last bit of obstacles. Cheryl came to Suicide Hill and gave it a few tries, but it wasn't working. She used the new winch point at the top to winch herself up.

Everyone gave it a little try at the bottom, but we all winched up in the end. Dave got to use Dane's winch on his Jeep, and he didn't want to give it back.

The Rock Pile was too steep for us, still, so we checked out the bypass. It looked a lot different than it had the year before, with the rocks stacked in a completely different place. It made it a completely new obstacle, and it was quite a bit more difficult.

Cheryl tried quite a few lines trying to get up the Rock Pile bypass, but nothing was working. This area didn't have a winch point, so the guys put a tree strap around a huge rock and Cheryl used that to winch herself up the obstacle. She didn't need much.

Monica winched right away, in the dark. It was too difficult. Everyone winched up except for Bruce, who made it up the bypass on his own.

We all got to the bottom of the bypass for Yellow Hill and Cheryl heard a noise. Don got out to see what was wrong and found that Cheryl's third link had snapped in two. She was basically without an upper control arm and her axle was free to rotate. When it snapped, it also pushed her track bar mount into her gas tank and took a chunk out of it. She didn't have enough gas to lose any on the trail, but she wouldn't be able to fill up her tank.

The guys worked on a fix for Cheryl's Jeep so we could get her off the trail. She ended up winching herself up the Yellow Hill bypass, then the rest of us drove up.

The long, bumpy road was even longer with Cheryl limping out. We chatted the whole way out, though, and it was still a good time. Along the way, both of her shocks broke free from the mounts as the axle kept rotating.

Don and the guys worked on Cheryl's Jeep the next day and managed to get it patched up enough to drive home. She did it without rear shocks, but she did it under her own power. What a crazy ending to a great day! 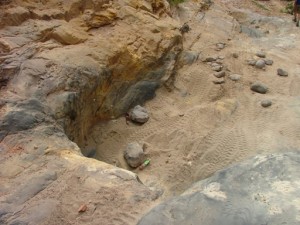 Led by Monica I.
It was our last day in Moab and we decided to run one of the craziest trails out there. Something bad always seems to happen on Pritchett Canyon, and this trip was no exception. The carnage started early, and Michael could barely make it to the trail. On the pavement,…
Join Us!
If you aren’t a Member or Subscriber, you can’t see all of the content on this site. Get membership information to see why this site is best when you join and log in