We left our meeting place with four vehicles (a tiny group for us!) but it didn't take long for Jason's rear drive shaft to blow up. We were still on pavement, not too far from Ted's Place where Jason left his trailer. That meant it was only three vehicles on the trail, but our bad luck continued through the rest of the day.

Rob noticed some oil all over his rear gas tank skid in a place where oil shouldn't be. He later found it on an air intake hose for the gas tank, which was still a mystery.

Walt brought his new Rubicon, only two weeks old. He tried very hard not to scratch it but he had a new scratch only about 30 minutes into the trail.

We got a late start so we had lunch right away, as soon as it got flat enough. Luckily we found some shade because it was very hot out. The sky was a beautiful blue, though.

The flies were biting and they didn't care about the bug spray. We didn't stick around at the lunch spot for too long. We were ready to do some wheeling!

With all of the moisture this year the grass and trees were a deep green. That with the blue sky made for some beautiful scenery. It was a nice change from our rainy trip last year.

We got to the Rock Quarry and we all got out at the bottom to walk around and discuss it. Some people were at the very top and were hoping we'd hurry up so they could watch, but then they left. The rock was so white in the sun it was difficult to look at.

The bottom of the first obstacle was dug out quite a bit but Monica thought she'd give it a try. She tried a line to the left but it was really loose and it put only one rear tire in the hole at the bottom so that wasn't going to work.

She moved over a little to try to run her driver's side tires over the most rock. It wasn't difficult to get on it but without lockers it just wasn't going to happen. She gave it a couple tries but it proved to be too difficult.

Everyone went up the hill to the middle section, then we got out again to look at the top obstacle in the Rock Quarry. No one decided to try it this time.

We left the Rock Quarry and headed off to Crystal Mountain, where our run of luck continued. 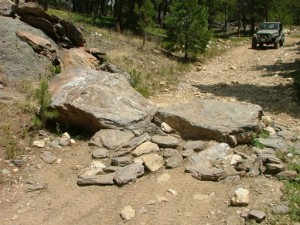