Trail Run on October 26, 2006
Report and photos by Monica I., Trail Leader
View trail information for Monitor and Merrimac Buttes

We were trying to find the 3-D trail when we accidentally turned down the Monitor and Merrimac Trail. It ended up being a nice diversion, with lots of interesting things to see. The best part was probably the long, straight sandy area.

We knew right away that we weren't on the right trail, but we decided to see where it went anyway. There was a parking area not too far in where we stopped. There was a small area of signs pointing to dinosaur bones and other things in the area, so we took the time to check it out. It ended up being really cool and we were glad we stopped.

We kept going toward the Monitor and Merrimac Buttes, thinking we might end up next to Determination Towers. There was a network of dirt trails in the middle that could have been confusing, but we just kept heading toward the buttes.

When the trail was long and straight we picked up speed and everyone was laughing all the way to the end. There was a big puddle on the way, and our formerly clean vehicles got very muddy very suddenly. Michael picked up a lot of mud, and Kendall drew smiley faces on his headlights.

We took another spur on the way back and found ourselves at the base of a hill. The trail definitely went up the hill, but water had washed a big crack right down the middle of it. We weren't sure if we could straddle it all the way up, but we figured we'd try.

Monica tried to straddle it but found the sides to be much softer than she thought they'd be. She sunk in and couldn't get any further, and found she also couldn't get out. Michael had to tug her out with a tow strap.

We had lunch there, and it was gorgeous. We decided not to tackle the hill, so we turned around.

We found another crack on Mill Canyon Road and had just as many troubles with it. Dane gave it a good try and made it through, though. The sand was definitely making things more challenging.

We even went up to the top of a big hill and found ourselves on an overlook over Bartlett Wash. We really enjoyed the scenery, and we spent a lot of time up on the big rock, exploring. We didn't really want to leave, but eventually we headed down.

This trail ended up being a great diversion in the middle of our day. 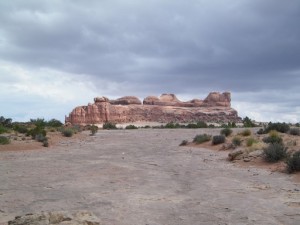 Led by Monica I.
We had just finished playing on Wipe-Out Hill at the end of Sevenmile Rim, and we started off down the Monitor and Merrimac Buttes trail to connect to the Wipe-Out Hill trail. The weather had turned nice, and we were all enjoying the day. It was still pretty early when…
Join Us!
If you aren’t a Member or Subscriber, you can’t see all of the content on this site. Get membership information to see why this site is best when you join and log in