We had just two Jeeps on the trail this time, with Mike S. hiking alongside us as we wheeled it. He was always faster than we were as we worked our way to the end. It was a great trip to the southern tip of the trail, as always.

Even the entrance was fun, so it started off right. Monica was first on the way in, and she got tippy near the end but it was fine. Mark got tippy too but he drove right through it.

We had a blast on the early rocks, weaving our way around them or over them. No one caught a corner panel here, unlike last time. It felt good to escape it.

We played in the Gap, and both Monica and Mark straddled it on the way through without any issues.

It wasn't long at all before we got to the Waterfall. We had a quick lunch and talked about who would go down it and who would go around it. Monica had been down it twice already this year and hit her spare tire carrier both times (both times requiring a weld to fix the breaks), so she decided to go around it this time.

Mark wasn't about to go around it, though, so he lined up and headed down. He used a modified version of the line down the side where you aren't airborne, and it worked out well. He rode his passenger tires along the rocky side and flexed his way through it. He was definitely tippy but in no danger of going over. He didn't even get stuck between the rocks and the tree. Nice!

Monica worked her way down the V and stopped just above the Wall to watch Mark come down the V. That's when we all heard a lot of air come out of one of Mark's tires. Mike took a look and found a huge cut in Mark's front passenger-side tire. It must have been pinched between a rock and his rim, slicing through the sidewall.

It was too difficult to Hi-Lift it where it was, so Mark backed up just a bit to get in a better place. Then he lifted it and changed the tire. He had a cordless impact wrench that made the job go by very quickly, which was cool. He aired the spare tire down too far (that always happens!) and had to air up a little bit before leaving, but it wasn't long before he was down the V and we were on our way.

Monica went down the Wall and through the next bit of challenging rocks, then went back to watch Mark. Mark came down the Wall with no issues at all, but then straddled a big rock at the bottom and he was high centered.

Mike and Mark worked on getting him off the rock, but in the end Mark used his winch to pull himself sideways enough to get off of it. Then he immediately ended up on another rock and stuck again. A little bit of stacking got him off of that one, though. It's amazing how changing your line just a little bit on Liberty will really get you stuck.

We had to pose on the Cube, of course. Monica got some great flex and some great pictures. Mark did the same and got some amazing flex out of his YJ. We both had a hard time getting back into our Jeeps because the driver's seat was so high in the air.

It was nice to have a bit of relaxing trail, then we started in on the last bit of rocks. Mark ended up with a rear tire in a hole and got a great wheel stand, and had a good time getting through it. He also noticed that he had managed to hit his passenger-side fender flares somewhere along the trail and both of them were off at one end.

The last bit actually had a foot of standing water around it, which we thought might make it a bit tougher. It didn't end up changing things, though, which was good.

Monica weaved her way around the big rock and had to work on not getting high centered there, but she got around it. The last set of rocks were just as interesting as always, and the drop off was a bit more severe because the mud had been dug out a bit.

Mark came through it without any issues, and the drop off at the end was also pretty steep for him.

We had walked up Patriot Trail and down Freedom Trail and the bottom half of Independence Trail before finishing up with Liberty Trail. After a little discussion we decided that instead of spending the next five or six hours working our way back out Liberty we were going to try to get up Bunker Hill on Independence. There were a few buggies there, but we got in line and headed out.

Liberty is such a great trail, and we had a great time! 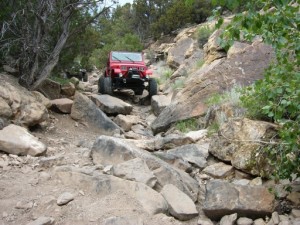