We ran this trail on the way out after running Carnage Canyon. We went down Left Hand Canyon to play in the Playground, and then it got really interesting. Kendall drove into a six-foot ditch on purpose and didn't do any damage -- though Monica had to watch it and may be permanently scarred!

Then Kendall tried a dirt hill with some tree roots a few times and couldn't make it up to the top of it. Monica had to try next, of course, and on the third or fourth try heard the rear axle SNAP! Kendall rigged up a brilliant fix that got us back down to the road. He put his spare tire on Monica's Jeep because it would be flush with the nerf bar on the side. Then he taped and roped the main part of a Hi-Lift Jack (the part with the holes) to the nerf bar so it extended over the the outside of the tire almost to the middle of the rim. It held the wheel on without any problems, even while the rear end flexed. It smoked a little as it burned rubber from the friction, but it was a great fix!

NOTE: I had to leave the Jeep on the shoulder of the road, 2 feet from pavement. When I came back to get it after about 36 hours someone had broken in and stolen everything (they left the seats, floormats and fire extinguishers). $2000 and a month later the Jeep was just about back to normal. DO NOT LEAVE YOUR VEHICLE UNATTENDED AT THIS TRAIL FOR ANY AMOUNT OF TIME! This happens a lot on this trail, apparently. 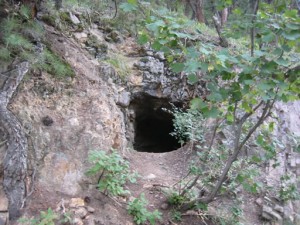