This is hands-down the most beautiful trail in Colorado that we have ever been on. Every turn brought something even more gorgeous than the turn before (and there were a lot of turns). Even though the trail wasn't difficult (just steep) it was highly worth it for the views.

Prepare for a very dusty ride, this trail is all fine dirt!

We ran this first, then part of Crystal City, then Schofield Pass. The cameras were out and lots of pictures were taken throughout the day. There were lots of waterfalls, meadows and huge trees. The trail was also very well-maintained, which was nice.

This trail will end up being one of the yearly runs from now on, even though it's very far from Denver. What a great run!

Use the arrows or dots to flip through the previews of the other reports for Lead King Basin. Click one of them to read more and see all of the photos from that day. 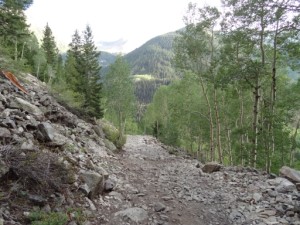 Led by Monica I.
We remembered Lead King Basin as the tougher of the two trails when compared to Crystal City. We found out we were wrong, though. Yes, it’s steeper and possibly more dangerous, but it was dry, smooth, and easy for us. It actually ended up being the quicker trail. We came…
Join Us!
If you aren’t a Member or Subscriber, you can’t see all of the content on this site. Get membership information to see why this site is best when you join and log in