Coming into the Ironclads trail you pass a lot of campsites on roads that kind of wander around. We were looking for forest service road 216, and although we saw signs for it, it was a bit confusing. Ladd was leading as he had already been on these trails on his own. We were using the GPS tracks to help stay on the right trail, and that really helped. We made a couple of wrong turns but quickly found the trail.

As we followed the right hand of the loop uphill, there were some fun spots along the trail. Nothing was too difficult, but the challenges were more that we had seen on our two earlier trails that day. There were a lot of signs for forest service road 216A directing us, and were well placed to keep folks on the trail. We were looking for the play hill, but it looked like the signs were placed to keep us off. We decided to continue to the end and come back to make sure we were really on the play hill.

We had a big surprise at the end of forest service road 216A. Where we expected to continue to the Window the trail had been changed. There was fencing and some fallen trees closing off the entry to the Window and the forest road turned left. There was a sign saying forest service road 216A went through private property. We followed the trail for a short bit and found a very scenic spot and admired the view. We were not sure how much further the road went on so we turned around and left the way we came in.

We checked the spot for Play Hill but it looked closed off. There were no signs or fences, but the signs for forest service road 216A pointed you to the road. Since we were ready to head home, we decided to check out Play Hill the next time we ran Ironclads.

We aired up at the Bunce Schoolhouse and then we all headed our separate ways home. For once, Ladd had the shortest drive home! 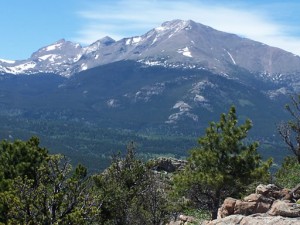