We were really on our way to California Gulch, and the only way to get there from Corkscrew Gulch is via Hurricane Pass. Therefore, we headed down for a brief period and worked our way up to the Snowdrift Mine.

Just past the mine there is a right turn that takes you to an overlook. This side trip is actually longer (or close to it, anyway) than the Hurricane Pass trail. The overlook was definitely worth the trip. The views climbing to the top and the overlook were splendid. The views of Corkscrew Pass and the road we took to the overlook turnoff were superb. In addition, the trail itself is a lot of fun. We worked our way up through the numerous switchbacks and finally arrived at the top. Looking down, we could see California Pass and California Gulch.

After spending some time at the overlook, we headed back down. The views on the way back to Hurricane Pass are different than those on the way up and they are equally as splendid. After a few stops for some pictures we were soon back at the turnoff.

Hurricane Pass was a great trail with an amazing overlook, and we were fortunate to have seen it. 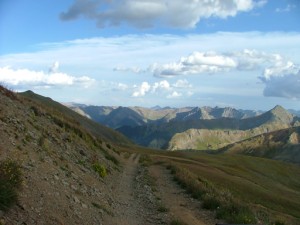 Led by Monica I.
We were only doing part of California Gulch this time, so it wouldn’t count just yet. We did half of California Gulch to get to Hurricane Pass, and we were soon heading up. Lake Como was beautiful, as it always is. Too bad the sun was going down. We stopped…
Join Us!
If you aren’t a Member or Subscriber, you can’t see all of the content on this site. Get membership information to see why this site is best when you join and log in