We stopped soon after starting up to the pass to put on doors and put tops up. Now that the sun was leaving, it was getting chilly.

We were soon at the pass, and then heading down the other side. When we got to the spur for the overlook, we headed up. There was a construction crew still working at the intersection with the spur road and the private property road, but they waved us by them. We were good to go.

The switchbacks were tight in places and some of the straight sections were surprising. They were often loose and steep, and one section was tippy and bumpy. It was fun just getting up there.

At the overlook, we all got out for a bit. It was windy and really chilly, but the views were worth it. We could see for miles toward the west, and we could see a good portion of the end of the Eureka Gulch trail where we had been earlier in the day. That was pretty cool! We just couldn't get enough of the views. Lake Emma must have been gorgeous from up there.

After we were sufficiently frozen, we headed down. That was also fun. The construction trucks left at the same time, getting right in the middle of our group. When that happened, we pulled over to let them in front of us, making it very slow going the rest of the trail. We got lucky and they headed down the county road to Silverton where we turned to do Corkscrew Gulch.

It was a great trail with an amazing overlook, and we were lucky to have seen it. It's a new favorite! 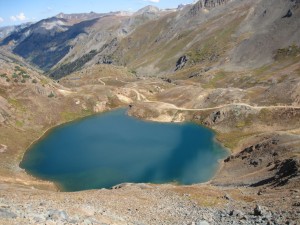 Led by Roger R.
We were really on our way to California Gulch, and the only way to get there from Corkscrew Gulch is via Hurricane Pass. Therefore, we headed down for a brief period and worked our way up to the Snowdrift Mine. Just past the mine there is a right turn that…
Join Us!
If you aren’t a Member or Subscriber, you can’t see all of the content on this site. Get membership information to see why this site is best when you join and log in