Trail Run on September 5, 2015
Report and photos by Monica I., Trail Leader
View trail information for Hunkidori Mine

We had a day planned around Peru Creek, and we discussed either doing Santa Fe Peak or Hunkidori Mine first. The weather was chilly, a break from summer's heat, and it helped us decide on the trail we'd start with. Santa Fe Peak is high in elevation and usually windy at the top, so we elected to stay in the trees and visit Hunkidori Mine instead. We drove through the town of Montezuma and took the beginning of the Saints John trail to find our trailhead.

We saw people camping everywhere, which made sense. It was Labor Day Weekend, and people were getting the last of the camping in before it got really cold at night. The crossing at Saints John Creek was as cool as ever, with a long pass through the water and scenery all around.

We saw some traffic coming out just as we were going into the trees, and we managed to get by each other without too many issues. Then we were into the forest. We kept passing the same hikers all the way to the end, as they'd catch us when we stopped.

The trail is pretty tight through the trees, passing through watery spots and creek crossings. When we got to the first wide spot in the trail we pulled off, parked, and had our morning snacks. It was only a little chilly, and we enjoyed chatting for a bit.

Then we were off, continuing our drive. It didn't seem to take long to get to the old dump truck and the cabins, where we parked for a long while. It's a cool cabin to explore. Someone had recently chopped a tree down that fell on the cabin, but the damage wasn't too bad. We checked everything out and walked around the area behind the cabin. No one drove any farther, though.

The trip to the mine at the end is pretty short from there, and we had it to ourselves. We parked at the mine, and Matt drove to the end. He was soon back, and he said the trip probably wasn't worth it except for the fun drive through the water.

We had lunch there, exploring between bites. Holly found wild raspberries near the top of the mine tailings, and they were small but good. It was a really nice lunch.

We headed back and didn't see anyone on the trail except for campers near the trailhead. It was a great trip, and we headed over to Peru Creek to hit our other trails. 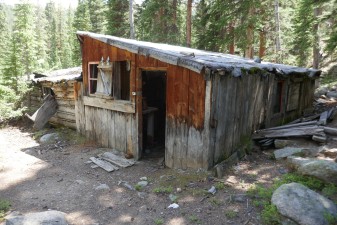