Hole In The Rock Trail

Trail Run on May 7, 2005
Report and photos by Ladd G., Trail Leader
View trail information for Hole In The Rock Trail

We left Moab on May 7th at about 3:00PM and headed south to Blanding, about 73 miles away. You should stop for gas in Moab because the next gas station is at Halls Crossing, 83 miles from Blanding. We didn't and though we made it we came off the trail running on fumes.

The Hole In The Rock trail (also known as "Hole-In-The-Rock") starts on the western fence line of the Halls Crossing Airport. We aired down, disconnected our sway bars, and got started at 7:30PM. We had hoped to get to the camp site before dark. The road is easy and a higher clearance car could easily navigate the first 6.1 miles to the ruins of an old fort. Stay to the right of the fort at 6.1 miles. From here you have a great view of the area and can see the place we decided to camp. Big cottonwood trees and soft sand makes for perfect camping. It only took us about 30 minutes to get to our camp site below the fort, 6.9 miles from the trailhead. We made camp, started a fire and had dinner just as it was getting dark.

On May 8th we slept in, finally breaking camp and getting on the trail around 9:30AM. As you come down the hill from the fort the trails forks again, and you should stay to the right. To the left is a network of trails (we explored about 10 miles of it) and all spurs ended in box canyons. We finally got back to the trail around 11AM.

A short distance from the fork below the Fort you come to a water crossing. This seemed a little amazing considering the desert area we were in. We had to stop and enjoy the water oasis in the desert. About 0.5 miles from the pond you come to the first slickrock climb. You can see where the wagon trains wore grooves in the sandstone. The trail goes up, over and back into another creek.

Going back down is where we first started to realize this was not really a trail for a stock SUV. The first real obstacle is a short drop with some scrapes, but not too bad. At about 8.5 miles we came to another camp site. This was only 1.6 miles from the sit
e we used. After a twisty, turning trail we came back out in the desert. We were at about an hour into the trail we saw the only folks we would the entire trip, and they were very surprised to see us on this remote trail as they had been out here a couple of days with no company. They consisted of a Jeep, Tacoma and an ATV. They warned us that we had a very long day ahead.

We stopped for lunch on the shady side of a large fin, only 11.9 miles into the trail. We weren't sure we would be able to complete the in one day trail even one way, so we pushed ahead with only a brief break. The trail is pretty much like many you find in the Moab area -- rocky, bumpy and dusty. At 16.2 miles (25.1 miles since we started the trail) we came to the climb to the Gray Mesa. This trail was blasted out of the sand stone. Typical of many shelf roads it is narrow with a long drop on the downhill side. The climb is broken up with a wide spot about half way. It looked like someone had camped here, with lots of sand and dirt. Someone had even left some firewood here.

In the middle of the climb is looks like many have created a small bypass up the sandstone face to start the second section. Sean and I stuck to the more difficult blasted trail and found that a little extra clearance is good to have here. Sean got his rear differential caught and needed to be strapped off. He was looking for a tougher line and found it. It is not really that hard, but being this remote, little mistakes are amplified.

When up on the mesa you are treated to dirt road. This road is a high speed trek for about 6 miles with great views. There is a short 0.5 mile break while you go down and back up a small ravine.

On top of the second mesa at about 22.5 miles there is a fork in the road where you stay to the left. According to the maps the fork to the right goes to Rincon. We noticed the water level in the lake and San Juan River looked pretty low.

At 23.3 miles we started back down. This is wher
e the trail started to become more difficult to find. Shortly after leaving the mesa you get to the top of The Chutes at 24.8 miles. At the bottom of The Chutes are several pot holes, on this day they were full of water. You then have an immediate climb back up.

We went another 1.2 miles and we came to another very difficult place to find the trail. The trail as we took it was on the far right, near a large pot hole. It looked like someone had tried to climb an extremely steep far left side, but the most used trail was to the right. I wouldn't say it was hard, but with theme of the day was caution. The remoteness and difficulties finding the trail coupled with the extreme consequences of nearly any mistake made every obstacle seem harder.

By this time Sean's low fuel light had been on for over an hour and we were really worried that we had made a big mistake by not getting gas at Halls Crossing. We had gone 129.4 miles since we last filled up and in four low we knew we might have an issue. We decided not to camp here and do the hike -- it was over 86 degrees and a nearly two-mile hike didn't seem like a good idea. The end of trail is very exposed and we wanted to head back part way to camp.

We started the trip back out around 5:30PM and the trail was just as hard to find in places, but we made really good time. We got back to The Chutes at 6PM. We knew the trail in places so didn't have to hunt very long, or scout each obstacle. We got to the place we wanted to camp just before 7PM (48 miles on the day). Sean was getting very worried about gas. We knew we had a couple more hours of light and it was much cooler and nicer to driv
e now. We were at a spot in the middle of Grays Mesa climb, a nice sandy place.

We pushed on and were back at the lunch spot before 8PM. It had taken us 4 hours from this spot to the end, but less than 3 hours to get back. We knew from here we would be able to get to a great camping spot at around 9PM and it would be just getting dark so we decided to push on. I wasn't sure if I felt like we were pushing too hard to make it a short trip or not, but we were having a great time and still seeing what we wanted to see.

As we had predicted, it was 8:45PM when we got back to the place we had camped the night before. So far we had done 57.6 miles of wheeling and we weren't out of gas. We set up camp, cooked our hot dogs over an open fire and talked about our great day.

On May 9th we packed and got on the road at about 8:45AM. It was 66 degrees and we needed gas. By the time we got to Halls Crossing and found gas I had 165.9 miles on one tank of gas, and almost half of it was in 4-low (73.2 miles). As far as gas went, it probably wasn't the best planning but we did make it with no problems. 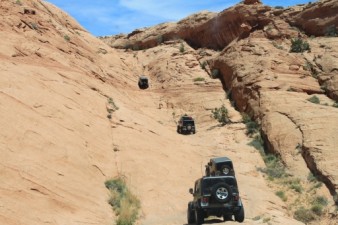 Led by Monica I.
We planned on driving from Denver to camp that night on the Hole In The Rock trail, but I-70 was closed in Glenwood Canyon and it threw a wrench into our plans. It put us a few hours behind, so we found the trailhead just before lunch. We all got…
Join Us!
If you aren’t a Member or Subscriber, you can’t see all of the content on this site. Get membership information to see why this site is best when you join and log in