We came out of Hidden Canyon and turned north to get up to the views above the canyon. We followed our track from 2007 but it was fenced off and closed to 4x4 vehicles, so we found another way in. It didn't take us too long to find the way, thankfully, and the climb was nice.

It seemed like it didn't take very long to get to Lunar Canyon. When we got to the big bowl of slickrock we forgot to look for the trail continuing on the other side before heading down, which meant we got lost on the slickrock. We were even following tracks and cairns, but it wasn't the right track. Then Walt remembered that we got off track the same way last time, and that we were supposed to look across the bowl for the trail on the other side. Though we lost more time we were soon on our way.

That was the last time Monica's CB worked, too. Coincidentally, Roger had a complete CB set up along with a magnetic antenna with him, so Monica was soon back on the radio. Someone always has to have CB problems, right?

We found the trail fairly easily after crossing the slickrock bowl, and it wasn't long before we were at the turnoff to the overlook. There was lots of room for parking and it was lunchtime, so we scheduled things well. We stopped there for a very scenic lunch. It was nice to get a little bit of sun on our skin before heading back to the Colorado winter that was getting started back home. We stayed there for quite a while just looking at scenery and hoping we'd see a plane take off from the airport. We didn't get our flight wish granted, but it was still a really nice lunch.

After leaving the overlook we continued along the trail. We were following our old GPS track when the trail just disappeared in front of us. We walked around following our old trail and then spotted the actual trail below us from a higher vantage point. Could we get lost more often on one trail? We backtracked to where we took the wrong trail and followed the fun trail up slickrock hills and around curves. That part was a blast, especially for Ben on his first slickrock climbs.

After the slickrock fun we climbed up a sandy hill of slickrock followed by a narrow hill of dirt. That was also a blast. Then we were on a high ridge and following the well-defined trail again.

Route finding was easy for the last bit of the trail, and soon we were at the intersection with the Bartlett Overlook trail. We stopped there for a break. They say the third time's a charm, so maybe the next time we're on the Hidden Canyon Overlook trail we won't get lost at all. We can only hope!

Use the arrows or dots to flip through the previews of the other reports for Hidden Canyon Overlook. Click one of them to read more and see all of the photos from that day. 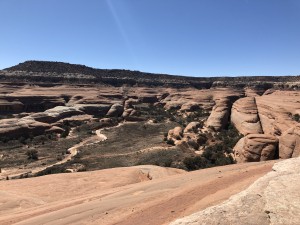 Led by Matt K.
Hidden Canyon Overlook had sand, slickrock, and great views from the trail. For the most part, Hidden Canyon Overlook was not that hard. It was easy going. Going through the Lunar Canyon was difficult at times because it was hard to stay on the trail. We lost it for a…
Join Us!
If you aren’t a Member or Subscriber, you can’t see all of the content on this site. Get membership information to see why this site is best when you join and log in