We had just come off of Poison Spider Mesa, then we stopped for lunch shortly after hitting Golden Spike. Before we knew it, we were at the Launch Pad. Everyone cruised right on up, and we were off to Skyline Drive for more sight seeing and pictures.

In the Washtub, both Ladd and Bob attempted the hard left line but the ledge was just too tall to get back tires over. In the past there had been some rocks stacked, but not this time, so we shifted right and cruised on up. Just beyond that ledge is a nice little slick rock climb called "Zuki Hill" that was giving the group in front of us trouble and did the same for us. Ladd had to try several time before getting it right. Does the heat make it harder?

We passed another group from Grand Junction shortly after Zuki Hill but before the first overlook. We stopped at the overlook and enjoyed the views. After leaving the overlook we started to hear chatter on the CB from the other Trail Damage group while they were doing Rusty Nail. It wasn't long before we could see them finishing Riff Raff and starting No Left Turn.

We got to the Golden Crack and all three of us made it across with no issues. This was before the other group was done with No Left Turn, so we decided to continue on with our goal of being in town and at the Moab Brewery by 7:00PM.

We came across another group shortly after the Body Snatcher. They were having a bit of trouble but moving forward. Eventually, we passed them and cruised on to the start of Gold Bar Rim. Body Snatcher was no problem, and we did it about as quickly as we had ever done it, with everyone hitting the far left line perfectly.

We had a great time on the trail and started Gold Bar Rim. 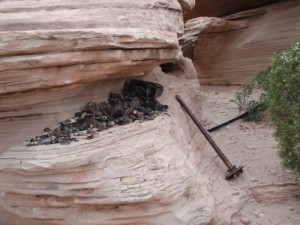