The weather was perfect and five of us were planning on running trails before the snow prevented it. One person canceled at the last minute and two others didn't show up, so it ended up just being Mark and Monica. Having just two vehicles allowed us to do more exploring than we usually would, so that's what we did.

We got a late start because we spent a lot of time waiting on people who didn't show up, but it was warming up nicely as we headed down the trail. We started from the south end, near Jefferson, because we were going to do Michigan Creek early in the day. It wasn't long before we found that trail, and we left Georgia Pass to check that one out.

After Michigan Creek, we continued up to Georgia Pass. It was weird to find that the south end had been rerouted since the topo maps were drawn up, and what used to be Georgia Pass no longer was. We followed the easy road, and eventually it met up with the trail we were expecting. The old trail was closed at a switchback.

The drive to the top was easy, and we found lots of other vehicles at the top. We didn't stay long, opting to head up Glacier Ridge instead. It was a great trip, and soon we were back down at the pass.

We had plans to go to the north end of Georgia Pass and then return south to check out some spurs that seemed to go through to the west of the trail. We checked on a few spurs, but everything we tried either ended at at dead end or a cable closing the trail. It was very frustrating, and it took some time to explore all of the spurs.

We checked out the trail leaving the confusing section of Georgia Pass, but we didn't go far before it got a little hairy. We assessed the situation and decided that it would be for another day. It seemed to be the end of forest service road 355.1C which is also accessible from the pass.

On the way back up to the pass we were coming off of a spur as a group of about eight vehicles passed us. We fell in behind them, and we would leave the trail every once in awhile to check out spurs. They were moving slowly enough that we would catch up with them again. One time, we found them blocking the trail and out of their vehicles to check out a moose. We couldn't believe that they wouldn't at least pull to the side. It was odd behavior, but we weren't in a hurry. They even managed to lose the back half of their group when they got split up. It's always interesting to see how other groups run.

We went back over the pass and eventually ended up back at the Jefferson end of the trail. We had plans to check out other trails near Boreas Pass, but it was getting late. In the end, we decided to call it a day. It was a great day for viewing fall colors. 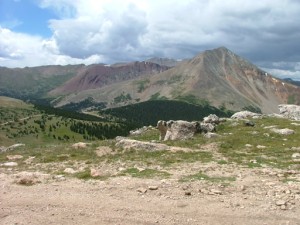