We spend so much time on the paved Fall River Road near Idaho Springs on I-70, so it was weird being on another road named Fall River Road that was so completely different. This one was much further north in Rocky Mountain National Park, and it was gorgeous.

It wasn't too far into the park (you have to pay a fee) and we followed signs to the road. There were minivans also doing the trail so we knew it wasn't going to be difficult. It was a one-way trail heading up to Fall River Pass.

The aspen trees were changing and the views were spectacular. The trail was flat and wide in most spots. There were a few turnouts where we stopped to get out and explore. Most of them offered a great view of the stream on the way up.

Once we were almost at timberline we could see our final destination -- the Alpine Visitor Center. It was a big building with smaller buildings around it, hovering on the edge of a ridge at Fall River Pass.

The road turned into more of a shelf road as we got higher in elevation, but it still wasn't difficult. Then at the top we ended up on pavement, surrounded by lots of vehicles that got there via Trail Ridge Road on the other side of the parking lot.

The visitor center was nice and informative, going over the different types of plants and animals that live above tree line in Colorado. It was a good stop to check out the tourist information and use the clean pit toilets.

We went out the other side to catch Trail Ridge Road on the way back down to Estes Park, having a nice lunch at a turnout on the side of the road. It was a great day of sightseeing. 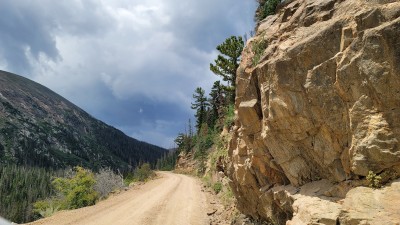 Led by Monica I.
Monica was touring Rocky Mountain National Park (RMNP) in Colorado in the daily driver, and running up Fall River Road (also known as “Old” Fall River Road) was a spur-of-the-moment decision. She strapped the GoPro on the roof and headed up. It’s a long, 360-degree video of the entire trip…
Join Us!
If you aren’t a Member or Subscriber, you can’t see all of the content on this site. Get membership information to see why this site is best when you join and log in