We seem to be in the area a lot but we've never run this trail, so we decided to make it a night run after doing our annual 4th of July trip to Middle St. Vrain and Coney Flats. We had dinner in Nederland and got to Eldora as the sun was just starting to go down, leaving us about an hour of light left.

Luckily there weren't too many of us because we started our trip by wandering aimlessly around Eldora. A few of the locals chased us down to give us directions. I'm sure they're used to having groups of 4x4 vehicles driving around looking for the trailhead, because it's nearly impossible to find unless you have a guide. At the end people were coming out on porches to point the way.

We pulled past the houses and out of the residential area to air down. You could barely walk around your vehicle to let the air out of your tires because the trail was so narrow. We had a loose rock wall to our left and a ledge on our right that would mean a steep fall into trees. We finished up as the sun was starting to truly set.

The trail didn't get any wider as we worked our way carefully up the steep hill. We started leaving the trees behind as we climbed. At one point there were tailings that had slid down the hill and the trail was barely wide enough for our Jeeps, tilting out to the side a bit and scaring all passengers as they hung over the edge.

We actually ran into a truck coming down and we discussed what to do with him for a bit. We were all in the middle and it would have been difficult for any of us to back out where there was truly enough room to pass, so the truck ended up pulling off at a scary angle to let us pass. He slid a little bit and couldn't get back down to the way he was facing before, so he had to follow us up for a bit till he could get turned around. He was very nice about the inconvenience.

When we got to the top of the cliff edge we could look down to Boulder Creek in the valley below. You could tell this part of the trail didn't get used much, and we were thankful to still have a bit of light to find our way through.

We all breathed a big sigh of relief as the trail turned away from the edge of Eldorado Mountain and we started up the switchbacks. We stopped to relax for a bit as soon as it got flat and safe enough and the last of the light was leaving us.

The rest of the trail had a few rocky places but nothing challenging. In the darkness one of the rocks we drove over had a face in the shadows that looked like E.T. We started talking about the movie "Deliverance" and looking for bears and generally freaking each other out in the trees.

When we got to the meadow we all got out to look at the first stars. It was pretty chilly after such a warm day. Dave decided 20psi was too much for this bumpy road so he aired down a bit more.

The trail is long but nice. We saw a few campers toward the other end and everyone was very friendly. When we got to the end we left Mike C. and Dave and the rest of the group continued on to Caribou Creek.

Use the arrows or dots to flip through the previews of the other reports for Eldorado Mountain. Click one of them to read more and see all of the photos from that day. 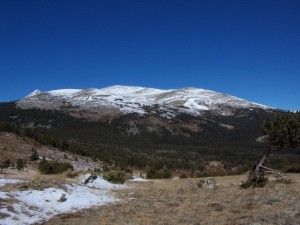 Led by Mike S.
This was the first of four trails planned for the day. The sun was out and spirits were high at our meeting spot in Nederland. We decided to disconnect our sway bars and air down our tires there since the trailhead was not too far away. The trailhead is located…
Join Us!
If you aren’t a Member or Subscriber, you can’t see all of the content on this site. Get membership information to see why this site is best when you join and log in