After we did Bard Creek we met Mark and the group headed up to Democrat Mountain. It was definitely a bumpy climb to the top but it was fun.

The bumps and the climbing seemed to go on forever. There was a group of hikers that we passed and we all agreed that the trail was a serious cardio workout. It's steep and it never stops climbing.

We were glad to get to the overlook where it's flat. We all got out to enjoy the view and point out parts of the Bard Creek trail that we could see. It really was a gorgeous day and we were in no rush to move.

But we did continue on after a little while. The trail finally stopped its steep climb and it was more mellow as we passed one spur climbing up, and then the spur that goes down to Silver Gulch, and then the next spur that goes higher still. We kept going until the main trail ended at the top of the Buckeye Lode Mine.

It was definitely time for lunch. We pulled our chairs up to the edge of the mine tailings and enjoyed the big views while we ate. It was relaxing and we took our time. We really do find some good lunch spots.

After lunch we packed up and headed up the closest spur to us, the one that goes the highest up Democrat Mountain. It didn't go far but the views were really great. It had a nice loop at the top so we didn't have to work to turn around. We hung out for a little bit but not too long.

Then we were headed down the Silver Gulch spur. We passed under the Buckeye Lode Mine at the bottom of the tailings. We kept descending, and the farther we got along the trail the less maintained and less well-traveled it got.

There were some parts that were covered in loose rock. When we went by the mine it looked like it used to be a decent-sized switchback but there had been a slide and the mining building had collapsed a bit. That meant that we had a hill of loose dirt on the switchback and we had to avoid a big part of the mine that was sticking into the trail. It meant you could only go one way.

After that the trail was very unmaintained. It was fairly narrow in almost all sections except for a few switchbacks. Most of it was covered in very loose rock. It was going to be fun coming back up.

We went down the last few switchbacks and Monica went ahead while the rest of the group stopped at the last switchback. That worked out well because there was a 10-foot pine tree growing in the middle of the trail and that was that. We all turned around and headed back up.

The climb up was definitely challenging because it was loose and steep in spots. It was fun, though. Mark had to work to find the right line at the switchback at the mine but eventually we all got through it. It seemed to go a lot quicker on the way up and we were soon back at the main trail.

We went up the short spur last and parked for a bit. Monica's Jeep really smelled like gasoline but it wasn't leaking. It must have been all of the bouncing.

We headed back down and through town where Mark left us. The rest of us headed for Bill Moore Lake. 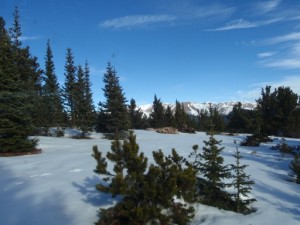 Led by Matt K.
Democrat Mountain was our first run of the day. We aired down by a small park just off of Main Street in Empire. It looked like it was going to be a nice sunny day with decent temperatures for November. We soon made our way to Democrat Mountain. We drove…
Join Us!
If you aren’t a Member or Subscriber, you can’t see all of the content on this site. Get membership information to see why this site is best when you join and log in