We only ran the far end of Crystal City, just after coming up Lead King Basin from Marble and just before running Schofield Pass to Crested Butte. It was only a few minutes off of the trail but it was really worth it.

The Powerhouse is amazingly beautiful, and Crystal City is really interesting. We parked in the town and went to a couple stores to look around. We also spoke with a resident spending her 54th summer living in Crystal City. They have their own running water and electricity due to a sophisticated system using the water from Crystal River.

We saw a lot of cars, SUVs and other vehicles at the City, in addition to lots of people. Everyone was really friendly. This would have been a great place to stop for lunch but we got a late start, leaving Carbondale at 10AM.

What a great diversion! 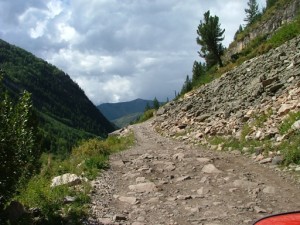 Led by Monica I.
We ran this trail immediately after running Lead King Basin. We had hoped to run Schofield Pass on the way out to get to Crested Butte but it was still covered in way too much snow and it was too dangerous. That meant we got to run the entirety of…
Join Us!
If you aren’t a Member or Subscriber, you can’t see all of the content on this site. Get membership information to see why this site is best when you join and log in